Does the West have a responsibility in case things go wrong in Latvia?

This article is a translation of "Heeft het Westen een verantwoordelijkheid als het in Letland misgaat?"

The eagerness with which NATO advances in the east is not to withstand a Russian threat, is it pure provocation and a demonstration of power politics. The result of the Latvian elections last weekend on the other hand reveal that the local population has a strong interest in reconciliation. In spite of a ferocious anti-Russian campaign by the Latvian parties, the social democratic Harmony party has again come out the strongest with around a quarter of the vote. 37 percent of the inhabitants of Latvia are Russians, and Harmony for the greater part draws on their support. But not only them. Nils Usakovs, an ethnic Latvian, was elected mayor of the capital Riga for Harmony in 2009; this shows according to an article in The Independent that the idea of reconciliation appeals to all sectors of the population. 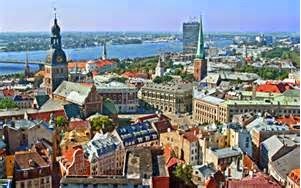 The neo-Nazi party, Jaunais Laiks (‘New Times’), which in 2002 still became the largest party with almost a quarter of the vote, on the other hand has lost ground, also because of infighting and splits. Yet the Latvian SS veterans still hold their annual parade; the monument commemorating the 11 thousand Latvian SS-men who perished in the war, was unveiled in the presence of the country’s minister of culture.

The policy of successive ethnic Latvian governments has been to exclude Russians from the right to vote and deny them a passport. This policy still affects around 300,000 Russian inhabitants. For them the requirement to do an exam in Latvian is either a practical barrier or a matter of principle, and they remain without civil rights as a result. In response to events in Ukraine Latvia for some time now has blocked the broadcasts of Russian state TV and it has scrapped a Russian culture festival.

Two-thirds of ethnic Latvians meanwhile see Russia as a threat. And yet, although there is also a smaller Russian party, the Latvian Russian Union, which maintains contact with Russians in the Crimea, it is Harmony that has come out much bigger.

Latvia meanwhile has been made a member of NATO, of the EU, and is even in the eurozone. So one would think that we have plenty opportunities to put an end to this apartheid policy and thus remove the potential for tension and conflict. However, our Dutch F-16s, which are in place to counter the (non-existent) Russian threat, in practice serve as cover for a policy of exclusion on the grounds of nationality which in the year 2014 should be unthinkable in the EU. But since ‘Putin’ has been identified as the bogeyman, so since Pussy Riot, the paedophilia law, and Ukraine, everything is allowed as long as it is anti-Russian.

Still, although the Latvian parties (all of them of the right) have exaggerated the Russian threat to win votes, Harmony won the election. They will again be kept out of government by the narrow nationalist current constituting a coalition of fear, and NATO, including the Netherlands, are behind that current. NATO has no interest in reconciliation and rapprochement. Maybe that we in the West will be mollified by the Union of Greens and Farmers (ZZS), which has proposed Aivars Lemberg, an oligarch, as candidate for a prime ministerial post. Lembergs made his fortune in the oil transit trade in the port of Ventspils, where he has been mayor even though he was put under house arrest for extortion and bribery for a time. Since the oil that he deals in is supplied by Russia, Lembergs wants good relations with Moscow—and thus we get to the situation that peace is in the hands of oligarchs against whom, one day, the population will rise—as happened in Ukraine. Will we then once again rush to the assistance of the oligarchs, the nationalists and the Nazis?