A safe haven for Christians in Iraq is undesirable and unrealistic

This article is a, slightly adapted, translation of "Safe Haven voor christenen in Irak is onwenselijk en irreëel"

In response to the plea of the Aramean and Aramaic scholars to launch a (humanitarian) intervention in Iraq to establish a safe haven for Christians in the Nineveh plain, the Aramean Movement for Human Rights want to express its strong dissent. Here in the Netherlands, the Assyrian community in exile have actually advocated an intervention too, and they have begun a hunger strike to support their demand. However, we, along with most Christians in Iraq, see this as undesirable and unrealistic. 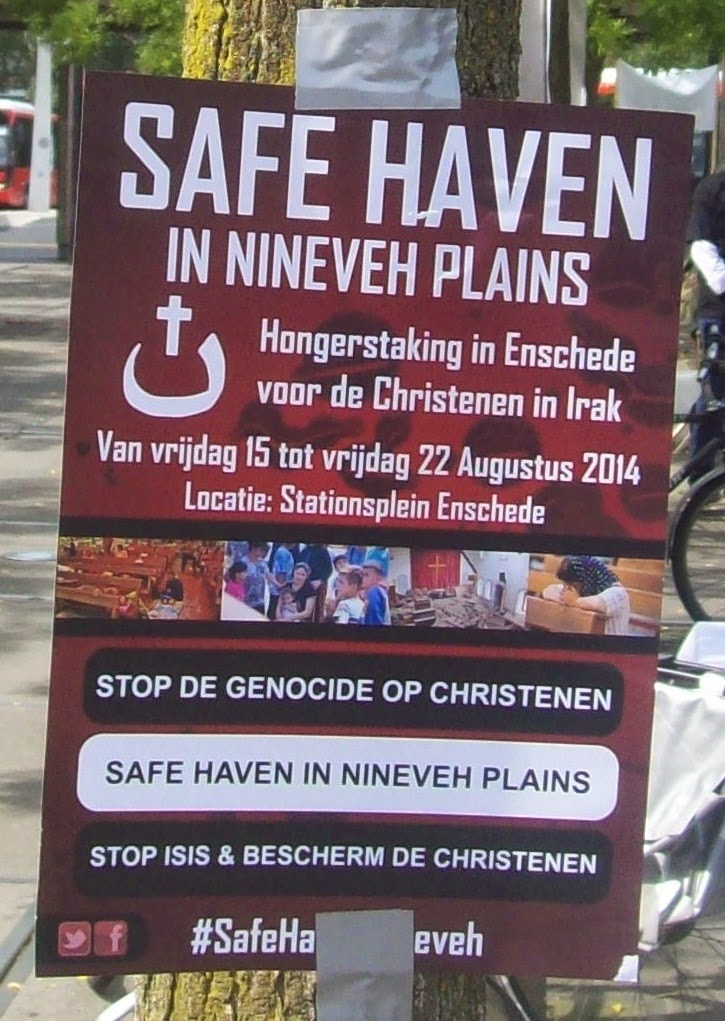 Certainly it is most urgent to recognize the systematic persecution of Christians in Iraq as a genocide, to continue to provide the population with elementary provisions and to commit to an enduring protection of the rights of ethnic and religious minorities in Iraq.

In the first place, parts of the Niniveh plain are inhabited by a majority of Christians, but it is not exclusively theirs. As happened in Bosnia at the time, many Christians and Yezidis in the region are victims of the violence committed by their Arab neighbours at the instigation of ISIS.

However, by the call for a safe haven, the Assyrian organisations are effectively advocating ethnic cleansing too.

In addition there is the fact that the Christian population of Iraq is not concentrated in one region. There are (or were) large Christian communities in all larger Iraqi cities, especially in Baghdad and Basra. The establishment of a Christian enclave as a ‘homeland’ in the north of the country would entail a large scale displacement of these Christians, who on the whole retain far stronger and older links with these cities than with the impoverished countryside of the Niniveh plain. “As Christians we constitute an integral part of Iraqi society and our place as Christians in Iraq is among other Iraqis,’ Louis Sako, currently the patriarch of the Chaldaean Church in Baghdad, has stated. ‘It is not the Muslims who are the problem, but the fundamentalists among them’.

For those who want to remove Christianity from the land of Iraq, the establishment of the proposed safe have would be a welcome gift. It would concentrate all Christians in a single group, and one single operation would suffice to kill or expel them. The Christian community in Iraq has meanwhile shrunk to a size too small to effectively defend itself, and events of the past month make clear that both the Iraqi and the Kurdish militias which should have protected them from ISIS, have abandoned this responsibility when it mattered. Neither do we expect much from a United Nations force, for which we only have to point again to Bosnia and to the fall of the ‘safe haven’ of Srebrenica. A small Christian enclave in the north of Iraq will always remain at the mercy of the Kurdish and Sunni Arab regions between which it is sandwiched.

The Aramean Movement for Human Rights is not in favour of an ethnic or religious partition of Iraq. We plead for a state in which the human rights and freedom of religion are guaranteed for all Iraqi citizens. We also remember very well that the current misery of Iraq started with the American invasion of 2003, and accordingly are not keen to advocate another Western intervention. Instead of dispatching more weapons and military personnel to the region, we plead for effective measures to prevent arms deliveries and (mostly foreign) fighters from reaching ISIS.