In July, right after the MH17 disaster, the newspaper Novaya Gazeta ran a front page making apologies to the Netherlands. 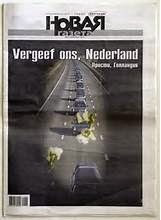 And now, this very newspaper makes headlines with the integral version of a report by Russian engineers who claim that the spot from which a Buk missile was fired at the plane, was in the hands of … the Ukrainian army, that is, that part under the command of the government of Poroshenko and Yatsenyuk, the group that came to power by the coup of 21 February 2014.

Novaya Gazeta is the newspaper founded with money from Gorbachev’s Nobel peace prize, and the businessman, Lebedev. A famous contributor to the paper was the murdered Anna Politkovskaïa.

In other words, a source above all suspicion.

Earlier views also concurred with the new, integrally reprinted report in Novaya Gazeta, viz., a first assessment by Robert Parry van ConsortiumNews.com and the story of an Ukrainian sergeant of last December.

Parry, who has outstanding sources in the American intelligence services, was told that there were detailed satellite images with Ukrainian Buk launchers, surrounded by junk and other signs of bad discipline.

This was confirmed in December by the anonymous Ukrainian sergeant who said the same in an interview. He relates of alcohol abuse, desertion, also by crossing the line to the rebel side. A seriously depressed morale would be prevalent among the troops.

But he also explains that there can never be an unintentional hit, because this is not a matter of just pressing a button. There is a prior exchange of codes between different units meant to prevent that one’s own plane would be mistakenly shot down.

Yet the writer of this particular interview, Michael Collins, remains convinced that there was a jet fighter in the air and still in December he argued that other theories, especially those involving Buk missiles, serve to distract attention.
Would that also be the case with the Novaya Gazeta article this time?

After all it remains difficult to forget the previously reported story of the Canadian-Ukrainian OSCE observer, Michael Bokiurkiw, the first to arrive at the scene, who reported there were traces of heavy machine gun fire and that therefore, MH17 would have been probably shot down by an Ukrainian jet.

The same holds for the analysis of photographs of the wreckage by a German pilot also with an Ukrainian name (Haisenko), who demonstrated that there were in and outgoing holes en that the pilot’s seat area showed a heavy concentration of bullet holes—something that cannot be the result of a Buk explosion which produces a spread pattern of fragments.

Finally there were a number of eye witnesses in a Russian language BBC report (which first was removed from the BBC website and then also from YouTube). On the basis of the above sources Robert Parry too came to the conclusion that an Ukrainian jet fighter must have been involved.

The fighter story was also included in the official reaction of the Russian military top brass right after the disaster (in the form of a question, viz., what was that jet doing there?). And then there is the detail that this jet would have been under the command of the chairman of the National Security council, the neo-Nazi, Parubiy, the man who executed the coup of February 2014 and who briefly after the MH17 disaster for unknown reasons resigned (to be precise, on 7 August. He is incidentally still active for the Kiev regime: in February of this year he was in the US and Canada to ask for weapons and was given a hero’s welcome).

In addition, according to another top Russian military official, a Buk leaves a huge smoke trail and makes tremendous noise, so the fact that nobody would have seen it is remarkable to say the least (this argument of course also can be held against the new Novaya Gazeta story). All this perhaps explains the almost desperate initiative of the Dutch investigating team to issue a late call for possible witnesses … of a Buk launch.

And then there always remains the question why we don’t hear what was recorded by the black boxes. The other day, in the case of GermanWings plane that crashed in an area that is accessible only with great difficulty, we nevertheless had the information in the black box almost instantly. But with MH17, it just seems not to work.

If there really was proof that the Russians or pro-Russian rebels would have been behind shooting down the plane, wouldn’t we have this dished out every day?

However, remaining silent also works well—by saying nothing, the suspicion that it was ‘Putin’ remains intact. And that is exactly where those who are driving towards a new Cold War or worse, want public opinion to go.