Pentagon allows Syrian base to fall to ISIS

In the Stanley Kubrick movie, Dr Strangelove, one of the main roles is played by a commander of an American air force base who of his own accord sends his bomber planes into the Soviet Union. One in the end cannot be recalled and the film ends with large mushroom clouds en the song, 'We'll meet again, don't know where, don't know when' by Vera Lynn. The base commander is a complete psychpath who cherishes a theory that centres on pure water, which the communists are supposedly intent on contaminating. Later it was established that in spite of initial denials (the film is of 1964) individual commanders did have the possibility to undertake this sort of action. It is therefore hardly reassuring that the American officer corps for instance still has enough fundamentalist, evangelical Christians who believe in different varieties of the Apocalypse. 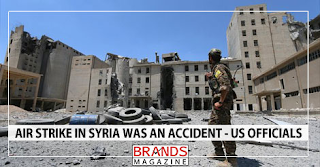 The agreement for a ceasefire in Syria that was concluded after intense negotiations between Kerry and Lavrov and went into force a week ago, has been effectively terminated by an American bombardment of the Syrian army base, Jebel Tharda, in the east of the country. 83 Syrian mlitary were killed in the bombardment and 120 wounded, after which the basis was stormed by ISIS and now is in the hands of the jihadists. This is a heavy blow to the government army because the air force base near Deir Ezzor (Dayr az Zawr) was being defended from Jebel Tharda. It is now inder fire from ISIS and one Syrian jet has already been shot down.

The Russians immediately called a meeting of the UN Security Council, provoking indignation on the part of the Americans, who continue to speak of a 'mistake'. When the Russian UN ambassador, Churkin, took the floor, his American colleague, Samantha Power, left the room to give a press conference in which the Russians were lambasted once again.

This sort of 'mistakes' has happened too often now not to raise suspicion. In 1999 the Americans 'by mistak' bombed the Chinese embassy in Belgrade, during the NATO bombardments on targets in Yugoslavia—purportedly because an old map had been used. That criminal war is still relevant for Syria. In Yugoslavia NATO air forces served as air cover for the Kosovo Liberation Army, a Maoist Albanian group meanwhile in power and doubling as the centre of of organised crime in the separatist Serbian province. The scenario was repeated in Libya—there too NATO provided an air force for jihadist groups that brought down the Gadaffi regime, again with disastrous results for the country, for Africa, and ultimately also for Europe, because migrants who in the days of Gadaffi would be stopped or even employed in Libya, now can pass freely (at least if they make it through the fighting of the rival parties in the continuing civil war).

All the elements mentioned are again involve in Syria. American and 'coalition' air support for jihadists; regime change in a UN member state; and 'mistakes'.

One of the elements in the agreement between Kerry and Lavrov was that the US would separate the so-called moderate opposition and the jihadists, to allow Americans and Russians to combar ISIS together. Al-Nusra, the meanwhile renamed branch of al-Qaeda in Syria, is no party to the ceasefire, but the Kerry-Lavrov accord determines that Syrian government forces are only allowed to attack al-Nusra only after prior permission from the Americans.

Thus these radical groups are in fact being protected, and Nusra exploits this to bombard the parts of Aleppo under government control from the rebel-held eastern half of the city.

The Americans even went so far as to demand of Assad that aid convoys had to get through to the eastern part of the city, warning Moscow that the planned coordination centre in Jordan, from which joint air strikes against ISIS would be undertaken, would not be realised before this had been settled.

With the bombardment on the base near Deir Azzor Washington has gone a step further, because now American air power has helped ISIS to a major victory.

When Kerry and Lavrov more than a week ago made their agreement public, a storm of protest rose from the Pentagon. Wasn't Russia the new enemy? And then we would be working together? However, in this case there was no psychopathic air force commander necessary to commit another 'mistake'. The American defence secretary, Ashton Carter, who among other things is in favour of a nuclear attack on North Korea, did not hide his disagreement with the accord concluded by his colleague, Kerry. That is the background of the 'mistake' at Deir Ezzor.