A Russian magazine, Sovershenno Sekretno, has published detailed revelations which document that the coup regime in Ukraine was responsible for the downing of Flight MH17 on 17 July 2014. The documents make clear that the Ukrainian secret service SBU was to remove all traces of an air force operation on that day. I would probably have shrugged my shoulders over another move in the propaganda war if the details would not have answered questions that remained after I conducted an extensive investigation myself. 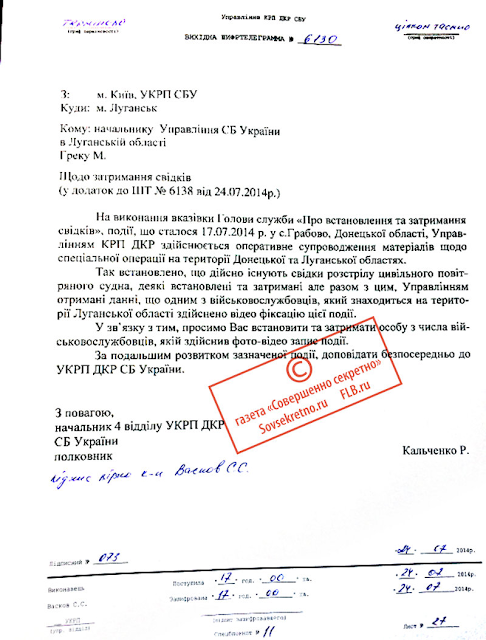 In a next blog I will summarise the information which these new revelations complement so so strikingly. Here, first, is what the documents, printed in the form of the original photocopies with explanatory text in the magazine, have to say. One should always be skeptical, but this is quite something.

The documents of Sovershenno Sekretno come from a whistleblower in the Ukrainian secret service, SBU, a criminal organisation that has been caught many times falsifying information (besides systematic torture and art theft). Nevertheless it has de facto gained control over the criminal investigation of MH17—even though Ukraine itself is a suspect.

The magazine's editors had the documents checked by a former KGB employee at the Lubyanka prison, because such papers can only be verified by specialists. The conclusion does not come as a surprise because otherwise it would not have been published. Even so, the details exactly fit the blank spaces that I myself had been left with.

The four documents pertain to the instruction by the central SBU in Kiev to local branches to remove all traces of an operation by combat planes on 17 July 2014. Dozens of servicemen were involved in that operation and there were hundreds of witnesses, and one or more of those have passed on the information to Sovershenno Sekretno and handed over papers that document the cover-up.

In the first document there is reference to a counterespionage operation against a prominent functionary of the Ukrainian state in the region Lugansk, code name 'Katsap'. Katsap was suspected of having had contact with the authorities of the rebellious Lugansk People's Republic, in which Russian intelligence, too, was involved. Katsap was one of the witnesses of the events of 17 July and also had meetings with representatives of Russian and EU mass media concerning the responsibility of the regime in Kiev, notably, its army and air force, in the downing of Flight MH17. The operation 'Katsap' started on 22 July but Sovershenno Sekretno is not aware of what happened to this senior functionary. Incidentally I cannot remember that the information provided bto 'EU mass media' by this witness at the risk of his life, ever reached the publication stage here.

The second document is a telegram dated 24 July, from SBU headquarters in Kiev to Lugansk SBU (pictured). This is about tracking down a military man who witnessed the attack on MH17 and filmed it on his iPhone. This military man was identified by the whistleblower as a sergeant of a mortar unit of the Kiev forces, first name Vyacheslav. This Vyacheslav some time later was killed by a sniper outside the combat zone, but still had been able to pass on a few photo's to a friend of his, a warrant officer of his unit (his name and that of the unit's commander are in the article).

Document 3, signed by the head of the SBU anti-terror unit, also dated 24 July, deals with penetrating the leadership of the rebellious Donetsk People's Republic and the elimination of the Russian intelligence officers who are active in it. But it also gives instructions to eliminate witnesses of the 'special operation' of 17 July and one might deduce from that that 'Vyacheslav' was killed as part of this mission, but that of course cannot be established with certainty.

Finally, Document 4 , of 28 July, again from central SBU, contains instructions to remove all traces of the special operation of 17 July, and in particular to track down witnesses and detain them; to rotate those who served in the area of Grabovo; to destroy all materials that might point to the presence of combat planes and the execution of air combat operations in the area, and to rotate the servicemen of the air squadron that performed flights in the designated area, especially the personnel of air brigade A-4101 of Chuguyev, Kharkov region.

Again, this may all be a falisification. But that chance is reduced if we combine the material with what I collected from other sources. To be continued.