In Syria with the jihadists, in Ukraine with the Fascists?

This article is a translation of "In Syrië met de jihadisten, in Oekraïne met de fascisten - tel uit je winst"

The political and media response in the West to Russian troop reinforcements in the Crimea are characterized by an amazing myopia, if not sometimes actually ridiculous. What to make of the statement by US Secretary of State Kerry when he expressed his indignation about ‘invading a country under false pretexts’. Last month (February) there were 1,700 victims of the continuing carnage in Iraq, but the British foreign secretary, William Hague, whose country never failed to join in when ‘countries had to be invaded under false pretexts’, solemnly declared the Crimea ‘the most serious crisis of the 21st century’. 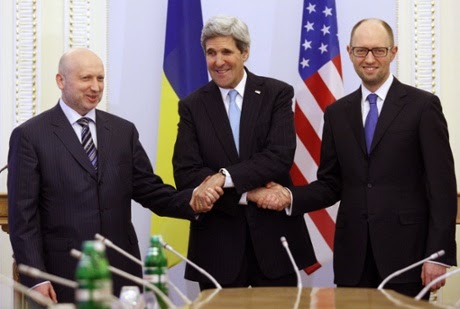 Kerry promptly offered $1 billion in aid to those in power in Kiev. Of course that is a solid foundation of the estimated $35 billion that Ukraine needs at short notice to survive financially (something that will not be possible without Russia anyway).

The picture shows Kerry with, left, ‘president’ Turchinov, who in his time as head of the Ukrainian secret service ordered the destruction of materials documenting the links between organised crime and Yuliya Timoshenko; and on the right, ‘prime minister’ Yatsenyuk, who led her Fatherland Party after she was imprisoned for fraud by Yanukovych.

Yatsenyuk is the man of the Americans; Klitsjko, the boxer favoured by Germany, has preferred to keep his powder dry for the elections in May. The US has already flown in advisers to help organize these. But Ukraine's problem is not that it cannot hold clean elections (Yanukovych was elected without significant irregularities); the problem is that those elected then abuse their mandate to pocket whatever there is left to steal.

To rise up against such a regime was therefore legitimate. But the personalities that today lead the government can perhaps best be compared to the Syrian National Council, which has no control over the jihadists fighting Assad. Neither ‘president’ Turchinov, nor ‘premier’ Yatsenyuk has a grip on the neo-Fascists who in the meantime wield power in the streets of Kiev and in the west of the country.

These are organised in Pravij Sektor (Right Sector) and the Svoboda Party. These currents view themselves as heirs of Stepan Bandera, the leader of the nationalist and anti-Semitic OUN, which collaborated with the Nazis in World War II-his portrait held up in a neo-Nazi demonstration in the picture below. 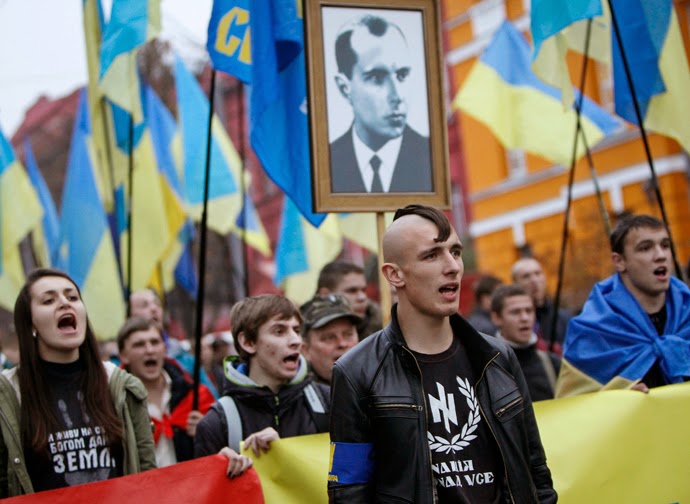 It need not surprise that the 200,000 strong Jewish community of Ukraine feels seriously threatened by the ‘revolution’, but the president of the Jewish confederation of Ukraine did not get a hearing when he implored Western embassies in Kiev to boycott Svoboda. But then, can ‘premier’ Yatsenyuk, being of Jewish descent himself, really be comfortable with Svoboda's Oleksandr Sych as vice-premier? Or how is he going to deal with Dmitrij Yarosh, of Pravij Sektor, the core neo-Nazi bloc, who is deputy head of national security? One wonders whether there would really not be anyone in Western diplomatic chancelleries able to warn against granting power to this self-appointed government, elected by nobody but slated nevertheless to receive large sums of money from the US, the EU, and the IMF.

The images of groups of neo-Nazis breaking into local government buildings and molesting a public prosecutor in his own office, are certainly frightening. They make abundantly clear why large parts of the Russian-speaking Ukrainian population feared the coming of such thugs to their living areas; especially in the case of the actual Russians who live in the Crimea. The law that suspends the right to use the Russian language, one of the first measures announced by the new power-holders, has not (yet) been enacted, but there need not be any doubt about the anti-Russian thrust.

To the Americans, the Russian naval base in Sebastopol has been a running sore for a long time. Hence a veritable storm has broken loose in the United States, with strident calls for severe sanctions. According to the hawks most vocal in this matter, it is the ‘weakness’ of Obama not to intervene in Syria that has encouraged Putin. The Crimea has already been compared to ‘Munich’ and the concessions made to Hitler. But Putin does not enjoy the power attributed to him in the West. He must listen to public opinion, which demands that he protect Russians and Russian-speaking Ukrainians against Nazis. And then, he has nothing to lose in the West, because the campaign painting him in the blackest of colours has been going on for years and actually reached a new high on the eve of the Sochi winter Olympics.

In the Netherlands we have founded War Is No Solution (OorlogIsGeenOplossing.nl) out of concern that US and NATO strategy ever since the end of the Cold War has aimed at eliminating, if need be by violent means, any remaining obstacles to global Western supremacy. The prediction that China would overtake the US economically in 2027 and the notion of the BRICS as the new economic powerhouse (likewise propounded by Goldman Sachs) may have little meaning by themselves. But for decision-makers in the US and the EU a mood has taken hold that the clock is ticking. Hence the new Cold War, which has not broken out over the Crimea but started right after the fall of the Berlin Wall—even though it took a while before this was recognized as such in Russia and China. However, in sharp contrast to the ‘First’ Cold War, when the US solicited the support of the modernising managerial classes and Social Democracy in Western Europe, today’s allies are the jihadists in the Middle East and neo-Nazis in the former Soviet Union.