The blanket surveillance law (Sleepnetwet) was adopted in the Upper House of the Dutch parliament last July, in the night prior to the summer recess. Thanks to alerted activist groups a campaign has been launched to force a referendum on the issue.
The first 10.000 signatures have been collected and now the effort is to get the 300.000 needed to really get the referendum going. That will not be achieved without further ado, because the people are sceptical about referendums after having been deceived twice. Also, they are either not informed about the issues, or indifferent, claiming that ‘we are being wiretapped anyway’. However, if a strong state and a permanent state of emergency will have been established, they will not be abolished again. We have a one-off opportunity to annul this attack on democracy. 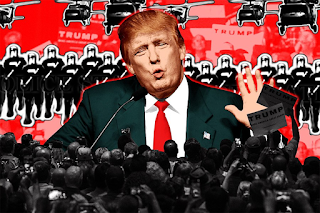 The blanket surveillance law is part of an international ‘security structure’ that has been imposed on Europe by the United States. When the Social Democrat minister of the interior, Plasterk, was caught lying about the transmission of surveillance data to the American NSA, it was already obvious that snooping on the communications of the population is not an stand-alone Dutch policy. It fits into the expansion of an Atlantic police state that is being directed from the US.

American pressure to establish a European surveillance structure dates from the late 1980s, at the time already under the heading of combating terrorism. In 1998 the European Parliament reported that this surveillance at the behest of the American intelligence services (the Echelon programme) had gone way too far. However, after the 9/11 attacks in New York, this criticism subsided and the European Parliament has no substantial prerogatives anyway.

The Atlantic ‘security structure’ has been enlarged ever since and national governments in Europe face the task to make this permanent. In an article in Monthly Review of January 2017, the Belgian sociologist, Jean-Claude Paye, in this connection speaks of ‘the police state as a postmodern form of the national state’, brief: the postmodern police state.

In 1991 NATO was transformed from a military alliance to an organisation dedicated to ‘crisis and risk management’, the fight against terrorism, and ‘the advancement of democracy.’ In fact NATO had intervened politically already in the Cold War, using an underground army. Its existence came to light in Italy in 1991 under the name ‘Gladio’. In the Netherlands, too, there was a branch of this underground army, which was led by the Social Democrat and future foreign secretary, Max van der Stoel. In Italy, Belgium, Greece, and Turkey people know that at that time already, ‘crisis management’ was part of the NATO mission.

For the French president, Charles de Gaulle, this was one reason to leave the NATO military organisation in 1966. De Gaulle himself had come to power in 1958, under the state of emergency foreseen in article 16 of the constitution. The state of exception was established when the generals of the army in Algeria wanted to seize power by a coup d’état. A dramatic moment in French history, compared to which the recent terror attacks, however serious, pale in significance.

Only under Chirac, Paris returned into the NATO fold in 1999, even though Gaullist reflexes remained alive, especially in the NATO air war over Kosovo. Under his successor, Sarkozy, France became an enthusiastic participant in NATO operations such as the one in Libya in 2011, of which we meanwhile know the consequences. In addition, Sarkozy reorganised the intelligence services to better fit them into the Atlantic ‘security structure’. Intelligence ties with Israel, the cradle of the ‘War on Terror’, were intensified as well.

After the terror attacks on Charlie Hebdo and Bataclan in 2015, France, too, imposed the state of emergency. Holland prolonged it after the attack in Nice on 14 July 2016—two weeks before it would have automatically expired. Hollande in fact wanted to take a further step, since the state of emergency is always temporary, and therefore not appropriate for the War on Terror, which looks to be indefinite. However, his plans to make the state of emergency permanent as a constitutional provision, had to be dropped for the moment.

Still the development towards a postmodern police state continues. In spite of the reassuring words of governments and economists, we live in a permanent, deep crisis, in which governments no longer trust their populations and the Atlantic ruling class no longer trusts governments. Hence, irrespective of whether there is ‘terrorism’ or not, the continuing efforts to give a permanent shape to the police state. As a result, the boundary line between the state of war and day-to-day politics has become blurred: in several European countries, armed military are meanwhile a routine sight in the streets, and there are plans to allow foreign NATO troops to conduct such patrols as well.

The blanket surveillance law in the Netherlands is part of the establishment of a police state in this sense. It is an attack on democracy which here will be put to a vote only once more: in a referendum.