The other day Ukrainian armed forces bombarded Donetsk with heavy artillery, causing seven civilian dead, and from Moscow it has been suggested that this is connected to the planned EU summit of 25-27 June in Brussels. There the sanctions on Russia will be up for discussion and if the Minsk agreement would hold, that would not be helpful to those in favour of further sanctions. These among other things have been imposed because of MH-17, now almost a year ago. What do we know in the meantime?
There had already been the statement of an Ukrainian military man that it had been a fighter jet and we now know his name as Evgeny Agapov, an air force mechanic. 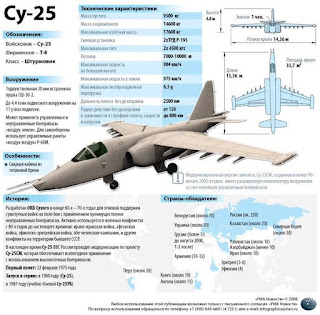 Agapov previously declared that an Ukrainian Sukhoi SU-25 (pictured), piloted by one captain Voloshin on 17 July had been on a mission and who upon returning without ammunition, stated that the plane had been ‘at the wrong place at the wrong time’, adding to his fellow pilots that ‘this was the wrong plane’. That evening the MH-17 disaster became public.

A few days ago however the designer of the SU-25 declared to German media that ‘his’ plane cannot reach an altitude of ten and a half kilometre and that its missiles could never have destroyed the Boeing, only damage it.

Yet not only do the impacts on the fuselage speak for a combined attack with R-60 air to air missiles and cannon, several former pilots of the SU-25 have contradicted the statements of the designer.
Major-general Sergey Borysyuk, commander of an air force division, has testified that he himself several times flew the SU-25 at a height of 12 kilometres and that in Afghanistan, 10.5 kilometre was the officially permitted altitude for operations with this plane.

On top of that the R-60 missiles have a reach of another 7.5 kilometres.

Gordon Duff, editor of the US publication Veterans Today, declared to Russia Today that a German Messerschmitt 262 (the first operational jet fighter in history) already reached 13 kilometres in 1945 and a Mustang P-51 propeller fighter of the US Air Force in the same period got even slightly higher. The SU-25 was developed to match the American A-10 Thunderbolt attack plane, which reaches an altitude of 15 kilometres—and then the Soviet version would not get there?
The former commander of the Russian air force, Vladimir Mikhailov, also confirmed that he flew the SU-25 and even got to 14 kilometres, and still the plane was manoeuvrable without difficulty.

Mikhailov declares on that issue that if MH-17 would have been hit by a Buk, the plane would have exploded in the air and the debris on the ground would not have been in such large fragments as it was now. According to Duff, who discussed this with many colleagues, if there would have been a Buk launch in broad daylight, it would have been visible as far as 80 kilometres and the enormous smoke trail would have been photographed by thousands of people and disseminated on twitter etc.

Finally the Russian arms producer, Almaz-Altey, which manufactures the Buk, has joined the debate by stating that even if there would have been a Buk involved, it would have been the older Buk-M1, a type no longer in use in Russia itself but still deployed in the former Soviet republics such as Ukraine. But even this company emphatically keeps open the option that it was a jet attack.

And thus we keep waiting for the results of ‘the investigation’. A call for witnesses of a Buk launch to come forward, a picture in the media of a dissipating white plume of smoke against a clear blue sky (it was overcast on 17 July), the black box which does not contain ‘anything special’, American satellites which did not notice anything either although the next day they were photographing ‘Russian positions’, and so on and so forth. In the meantime we hear every day who is guilty. On the sports pages, we read that athletes will not go to Moscow ‘because of MH17’, on the economy pages that the Netherlands is switching to Norwegian oil supplies ‘because of MH17’, etc. It is worth a study to see how the media keep alive a myth without ever confirming it on page one.