This week I was in Copenhagen for a lecture and learned from students there that a few days before, a serious incident happened with neo-Nazis in neighbouring Sweden. Participants in a demonstration against violence against women in Malmö, on 8 March (international women’s day) had been attacked with knives. In the incident a well-known activist against racism and homophobic violence, who for a while already had been ‘followed’ by the Svenskarnas Parti (the Party of Swedes, a Neonazi group, was beaten up so badly that he is still in intensive care. Three women suffered stab wounds in arms and lungs. On my return I found the details of the incident on an anarchist website. What makes the incident even more frightening was that one of the leaders of the PoS, Andreas Carlsson, had just returned from Ukraine where he and his party comrades had been assisting their sister party, Svoboda, as well as Right Sector, in street fighting. 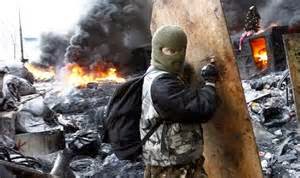 Street fighting on Maidan in Kiev

One section of the group had remained behind to be enlisted in the new National Guard of Ukraine, which at that point was being formed under the auspices of the National Security Council (in which Svoboda and the Right Sector occupy the key positions, and with a planned strength of 60,000 men). Carlsson had returned home to restore ‘order’ there.

The fact that these Swedish neo-Nazis are in Ukraine (a second Swedish group, Nordisk Ungdom, is also there) is remarkable, because we do not know of a comparable presence of any of the abundant supply of neo-Nazi and Right-populist groupings from the other European countries.

As argued before, the EU and the US (and hence, NATO) are fundamentally divided on the issue of Ukraine, as they were concerning Yugoslavia. The notorious conversation of US assistant secretary Victoria Nuland and the American ambassador in Kiev, leaked by the Russians on 6 February last, had only just been made public when three European secretaries of foreign affairs (Steinmeier, Fabius, Sikorski) in the presence of a Russian emissary, concluded an agreement with Yanukovych. It contained an amnesty, new elections in December, and other provisions. Significantly, there was no US diplomat present in these negotiations, an obvious reprimand to Nuland’s earlier interference.

The next day however serious riots erupted in which snipers shot at both the police and demonstrators. Nothing was heard about the agreement any longer, Yanukovych fled the country, and power in Kiev as taken by the leaders of Timoshenko’s party and by Svoboda and Right Sector—the German favorit, Klitsjko, remained on the sideline.

The Estonian foreign secretary phoned EU official Catherine Ashton to tell her that the snipers worked for the opposition; in the meantime they have been identified as hailing from the UNA-UNSO network. The leader of UNA-UNSO, Andrij Shkil, was an adviser van Timoshenko’s and in 2003-04 was responsible for her security during the ‘Orange Revolution’, when Yanukovych was removed for the first time.

Unlike Svoboda or Right Sector, however, UNA-UNSO is not primarily an Ukrainian organisation but part of the underground NATO network of which the existence at the end of the Cold War became known as Gladio, after the Italian branch. UNA-UNSO has been active in a series of armed conflicts, from Chechnya to Kosovo, and always against the Russians. 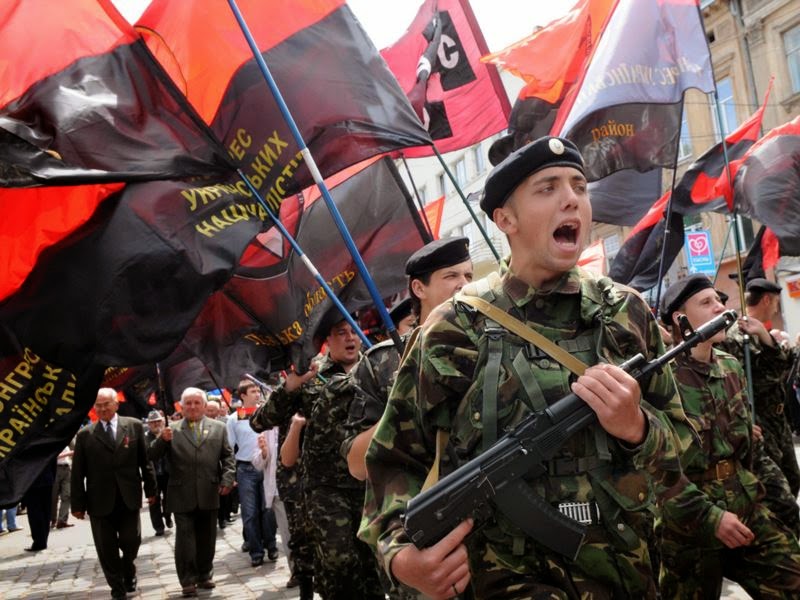 It would not be the first time that NATO knowingly exploits provocations to allow American influence to prevail over the EU’s, in this case in particular Germany’s. In Yugoslavia, a deadly mortar attack was launched against a market in Sarajevo to trigger an intervention in Bosnia; in Kosovo mass graves were ‘discovered’, and so on. We know since Portugal under Salazar and Caetano, the fascist coup in Greece in 1967, and various coups in Turkey (the most recent one in 1980) that NATO works with rulers and putschists of extreme right or even neo-Nazi stripe if need be.

What is most amazing, if one thinks about it, is how easily the European countries are cajoled into following the NATO confrontation course by this kind of intervention. And then I am not speaking about our foreign secretary, Frans Timmermans, who already visited Maidan square in Kiev for the second time, but about Angela Merkel, who was so angry about her phone being bugged by the NSA. In the Bundestag she made a speech on the Crimea and world politics in the 21st century which made one’s ears fall off—as if Yugoslavia, NATO expansion, Afghanistan, Iraq or Libya never happened. But of course we don’t hear anything about those developments any more. The magisterial speech in which Gregor Gysi made short shrift of Merkel’s pious sermon, will not be broadcast on our TV though.

In that country a structural shift has occurred following the assassination of the Social Democrat, Olof Palme, in 1986; the US and NATO today exercise a power there which exceeds that in most European countries. Wikileaks revealed that Internet traffic between Russia and the rest of Europe and North America (which in large part is transmitted by Swedish servers), is being permanently monitored by the US under a secret agreement. No wonder that the Swedes were ready to use a European subpoena to ensure that Julian Assange would be handed over to the judicial authorities; it is only thanks to Ecuador that he has escaped, holed up though for more than a year already in a small room in the embassy in London.

Assange has called Sweden’s foreign secretary, Carl Bildt, a CIA agent; I can’t judge, it is usually not in one’s CV either. What I do know, is that Bildt, the arch-enemy of Palme in the past, has declared on the P1 channel of Swedish radio that Svoboda, the Party of Swedes’ sister party in Ukraine, ‘are European democrats aspiring to values that are also ours’. That is one way of encouraging neo-Nazis in the country to continue their brutal actions.

The attack of 8 March was not the first incident either. In January, a 16-year old member of the Swedish Social Democratic Youth, SSU, was assaulted by two men in the street. They threatened her that if she would persist in spreading her ideas there was something else in store for her. After the massacre among the SSU’s Norwegian sister organisation by Anders Breivik (his former party is meanwhile part of the Norwegian government), one would expect that Dutch Social Democrats would begin to worry over the radical Rightism in Europe, from our own country to Ukraine. But foreign secretary Timmermans does not want to hear of it and prefers to travel to Kiev again to express his support.