Maintaining NATO and EU discipline in France. The Macron candidacy

The first round in the French presidential election was dramatic by many standards, including a last-minute terrorist attack that interrupted the steep rise in the polls of Jean-Luc Mélenchon. Mélenchon in 2012 joined forces with what remains of the French communist party and scored a disappointing 11 percent. This time he struck out on his own, with La France insoumise, 'Insubordinate France'. Its programme, combining social and ecological themes with the promise to exit from NATO, but especially, the oratorical gifts of its candidate and his spectacular campaign techniques, saw him do much, much better this time. Until... 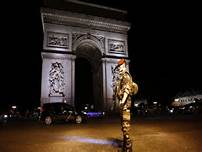 Mélenchon is the absolute opposite of the eventually victorious candidate and probable next president, Emmanuel Macron. Like the two other main candidates, Fillon (traditional Right) and Le Pen (extreme Right), Mélenchon favoured détente with Russia. This left Macron the only NATO/EU candidate. His rise was facilitated by the Euro-Atlantic power structure every step of the way. Educated at the École Nationale d’Administration (ENA), the country's elite training ground, Macron in 2002 became an intern with Henry Hermand, a real estate magnate supporting a neoliberal Third Way in France in the spirit of Bill Clinton and Tony Blair. Jacques Attali, an adviser to former Socialist president Mitterrand, in 2007 made Macron, then 29, the rapporteur of a commission elaborating the concrete steps for such a policy. Reducing the state role, removing social protection, privatisation and liberalisation were presented in Macron's report as lying beyond the left-right divide.

In 2008 Macron was hired by the Rothschild investment bank, and two years later Attali introduced him to presidential candidate François Hollande, who entrusted him with coordinating his economic programme. After the 2012 election, Macron became secretary at the presidential palace with the same portfolio. Two years into the job, he attended the 2014 Bilderberg Conference in St Moritz, the annual gathering at which the Euro-Atlantic elite meets those who work for them, and soon after was appointed minister of economics. In 2016 he left the government again, and with an extensive network built up in his successive roles, including finance and consultancy, the employers' organization Medef and the neoliberal trade union, CFDT, established his 'new' political movement, En marche!

In fact there is nothing new about En marche!, it is the straight continuation of the neoliberal Third Way, tried out already under Hollande. Hollande and his team combined the authoritarian imposition of radical anti-labour measures (neutralising their own socialist parliamentary majority by using the constitutional provision that a particular measure can be blocked only through a motion of censure against the government) with the state of emergency. Macron is one of the architects of this policy.

This state of emergency was proclaimed in November 2015, after the bloody terror attacks in Paris that month, and it is still in place. Indeed these are the first elections held under the state of emergency in the Fifth Republic. As Claude Serfati argues in his new book, The Military (Paris 2017), the French army is a state within the state. Under the state of emergency it is also being deployed on home soil, after it has already spread far and wide in a range of foreign wars, notably in Africa (Libya, Mali, etc.). As far as Macron is concerned, there should also be a military intervention in Syria.

Armed military personnel are today a regular feature in French cities, but to little effect when it comes to actual protection. There is on the other hand a palpable effect on every form of opposition, irrespective of its actual programme. Thus briefly after the imposition of the state of emergency, ecological activists were prevented from demonstrating at the Paris climate conference although they can hardly be considered terrorists.

How a real terror attack affects the regular election process was demonstrated in the first round of the presidential election of 23 April. In the run-up to the election, Insubordinate France was on a steep rise in the polls. In the table below, I show the bandwidth of opinion poll results for each month, the mutation for the four main candidates until April 20 (the deadly attack at the Champs Elysées occurred at 2100 hrs in the evening) and the mutation after that date, that is to say, by looking at the polls for April that included polling on the day after the attack. From these figures, which understate the turnaround because polls including the 21st are 'contaminated' by surveys conducted in the days immediately preceding it (say, a poll conducted from 18 to 21 April). Even so, the shock to the Mélenchon campaign stands out.


Is there any reason, then, to raise questions about this particular terror attack that might cast doubt on its authenticity?

As with several other terrorist incidents, the perpetrator at the Champs Elysées left his identity papers in his car, allowing him to be immediately identified as a 'jihadist', and he was also killed instead of incapacitated and arrested, so that no further discussion about his motives can arise. One name released as being an accomplice, turned out to be unrelated to the attack. In the case of the Charlie Hebdo murders, it all happened exactly like this (I have written about this on 8, 12 and 16 January 2015, and once again on 16 January 2016, the first anniversary of the attacks).

As with many other terrorist incidents, the perpetrator in this case was a known criminal. He was condemned in 2005 to a 15 years' prison term for attempted murder of a policeman. He was in the picture as a potential terrorist and was actually arrested as recently as 23 February last, but released again for lack of proof. So the French authorities were well aware of his continued ability to strike, but then, one cannot post a policeman next to every suspect.

The state of emergency in France has a stifling effect on all critical thought, certainly where the deep state is concerned. The deep state is the political underworld, where official and unofficial procedures intertwine, law enforcement and breaking of the law cross over into each other. Ultimately, it is the emergency brake used to uphold the existing power structures of state and class, if need be against democracy. Hence its actual operations remain very much in the dark, certainly because government and media operate on the basis of a silent agreement that every departure from the official account of any event is dismissed as conspiracy theory.

It may well be that the attack at the Champs Elysées was a spontaneous rampage by a recidivist criminal, resulting in the tragic death of a serving police officer and wounding two others. It may also be more than that: a cynical intervention to prevent an unwanted outcome of the first round of the French presidential elections. I do not have the answer, except that the impact of the event fits into the authoritarian trend inaugurated with the War on Terror by which a dying social order defends itself against democracy.