NATO as a malignant growth (4). The road through Serbia

This article is a translation of "De NAVO als kwaadaardig gezwel (4). De route via Servië"

In 1999 NATO launched an air war against rump-Yugoslavia, which at the time was still composed of Serbia including its restive Albanian-majority province of Kosovo, and Montenegro. At the end of negotiations at Rambouillet near Paris, when it seemed the parties had reached agreement on most issues, Bill Cinton’s secretary of state, Madeleine Albright, demanded of the then president of Yugoslavia, Slobodan Milošević, that he sign an Individual Partnership Action Plan (IPAP) with NATO. That would give the alliance (read, the United States armed forces in the first place) free access, tax freedom including freedom of airport fees, and immunity from prosecution over possible criminal offences on Yugoslav territory. All public or private facilities NATO might require on Yugoslav soil were to be made available to it.
When Yugoslavia refused this outrageous demand, the NATO air war against rump-Yugoslavia was unleashed to force it to withdraw from Kosovo altogether. 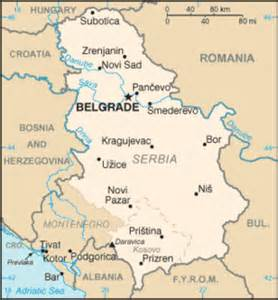 In February 2016, the Serbian parliament with as little noise as possible ratified ...the IPAP agreement with NATO.

This is not just a humiliating turnabout. It also gives insight into NATO plans for a future war in Europe.

Milošević, who had come to power by mobilising the fears among Serbians over the resurgence of Croat nationalism and the memories of the genocide in World War II, has meanwhile died in prison in the Hague. But obviously, the population of Serbia has not forgotten that IPAP had been the trigger of an air war against their country. This included the destruction of bridges across the Danube north of Belgrade, far from Kosovo, and targets in the capital itself, among them the TV-studios of the national broadcaster, killing several staff and declared a war crime by Amnesty.

So when the Serbian foreign minister signed the agreement in March 2015, demonstrations erupted across the country, and there was every reason to keep the ratification, almost a year later, under wraps. The RTV studio did not report it, because a large majority of Serbia’s population is against any association with NATO.

In a major European war over e.g. Ukraine, or an intervention in Syria, NATO would need Serbia mainly as a corridor. The imminent accession of tiny Montenegro as a new NATO member is important in this connection. In addition the United States has taken the initiative to construct a highway from Niš (Central Serbia), via Priština (Kosovo) to Durrës (Albania). With that highway in place the US and NATO would be able to land troops and armour in the port of Durrës on the Adriatic coast, and then tanks and equipment would need only 12 hours to reach the Black Sea (the ports of Varna and Burgas in Bulgaria).

With that highway they will be able for quickly transfer land forces and armoured and mechanized troops from the Adriatic coast (in Albania), through Niš to the Black Sea coast. From the Adriatic their tanks will need only 12 hours. The road has little or no economic significance and the reason for US encouragement and support is solely military.

The United States has also exerted steady pressure on Serbia to ask for NATO membership itself, but this is out of the question as long as people remember how NATO jets roared over the capital and the citizens including prominent artists and intellectuals took to the city’s bridges to act as human shields to protect them from destruction. Hence the president, Aleksandar Vucić, cannot go further than the IPAP agreement, which already is a capitulation. If he is reelected on Sunday 2 April, it will paradoxically be thanks to his solemn vow that Serbia will never be a member of NATO. That will enable him to pursue a personal authoritarian rule along the lines becoming more and more popular in eastern Europe (in NATO Poland and Hungary among others, not to speak of Djukanović’s virtual dictatorship in NATO candidate member Montenegro).

The IPAP agreement is not only a military matter either. It also speaks of an ‘acceleration of the ownership transformation’ and ‘protection of human rights’. The first refers to the need to privatise Telekom Serbia and Electric Power Industry of Serbia. The latter was also a target of NATO bombing in 1999, when NATO spokesman Jamie Shea bragged on TV how the alliance switched its transformers on and off by showering them with silver paper strips.

The human rights paragraph refers to gay marriage and rights, equally unpopular in socially conservative Serbia, but important to empower groups that may come in handy as ‘civil society’ supporters, should renewed opposition to the Serbian state be necessary.

For ultimately, neoliberalism is not just market economics. It is a strategy to disempower the sovereign state. A weak state without control over key infrastructure (here, telecom and electricity) and exposed to identity politics from vocal minorities with guaranteed media and celebrity support from the West, cannot resist Western political economic supremacy either.

Russia meanwhile, confident it retains important influence, notably among the most conservative nationalist currents in Serbian society, has just supplied Belgrade with half a dozen MiG-29 fighter jets to make up for a shortfall in its air force.

This should remind us of the dangers of NATO forward pressure and its obvious intent to prepare for a military showdown with Russia.