Following 9/11, NRC-Handelsblad, the Dutch newspaper of record, was one of the print media that published the drawing board design of the Twin Towers in order to contradict ‘conspiracy theories’ that they had been demolished instead of ‘melted’. How a briefly raging kerosene fireball (650o Celsius max.) could have sufficiently weakened the steel structures supporting the towers (protracted exposure to 1000o Celsius or more needed), was not explained. Neither did we hear about why a third tower (WTC 7), of the same owner (Larry Silverstein), also collapsed although it had not been struck by a plane. The sole concern was: no conspiracy theories! That method is now being applied again to MH17. 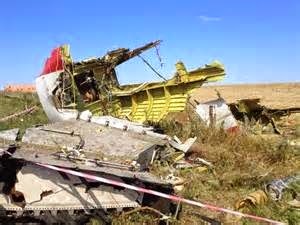 In an article over two pages entitled ‘It was a Buk missile, but who supplied it?’, dated 10 December last, the newspaper’s commentator opens as follows. ‘Hardly anyone doubts any longer that flight MH17 was brought down by a Buk missile. But where did the Buk come from?’

In a separate frame, titled ‘Disinformation about MH17 in abundance’, we hear about the views disseminated by the Russian top brass and globalresearch.ca, but these are dismissed as fantasy, ‘with or without Photoshop’.

Never mind that from several quarters it has been suggested that the possibility that MH17 was shot down by the machine guns of a fighter jet—from the Canadian OSCE observer was the first to arrive on the scene to the Dutch researchers, whose incompetence has meanwhile led a group of family members to demand that the investigation will be taken over by the UN (rejected). NRC-Handelsblad however simply ignores this and instead applies the following method.

This method is not based on a straightforward rejection of other sources than the ‘quality press’, on the contrary. There is also ‘civic journalism’ of a high level, sometimes even better than official sources—the paper especially lavishes praise on ‘the British collective, Bellingcat’. ‘It found strong indications that the Buk that was used, came from Russia.’

However, there is also internet sites that have come to quite different conclusions, such as for instance, ConsortiumNews of Robert Parry, or Unz Review, in which former NRC correspondent, Karel van Wolferen, has written on this very subject, or of course our own OorlogIsGeenOplossing.nl. But that evidently is not ‘civic journalism of a high level’.

In brief, ‘in spite of misleading information on the internet, reasonable people can hardly doubt any longer’. So what are the sources for reasonable people to base their judgment on? On 17 July journalists of Paris Match (yes, really, Paris Match: the indispensable source about the princely family of Monaco, the private lives of the players of Paris Saint-Germain, and much more) saw a Buk in Donetsk, the same that had been observed in a Russian military convoy a few days earlier. True, other sources contradicted this on account of a different means of transport or otherwise, but still it remains newsworthy.

So a ‘stolen Ukrainian Buk’ after all? Somebody must have left it with the keys in the ignition!

Now you can steal a Volkswagen Golf that way, but a Buk is a system, with a command vehicle, a radar unit, and a launcher. ‘Stealing’ that and then knowing how to handle the whole thing is of course quite a different matter. What I have seen of the various rebel groups, Cossacks here, Stalinists and Russian ultra-nationalists there, has not so far given me the idea that highly qualified military experts are at hand in the required number. But maybe the ‘Bellingcat’ collective has more information on that score.

‘Right after the crash the American government was adamant: the Buk was of Russian provenance’. Well, it would have been news if in Washington a different opinion had been voiced. But then the newspaper adds, as a masterstroke, ‘the inhabitants of Snezhnoye were even able to add that the Buk crew spoke north-Russian and not south-Russian as in east Ukraine’.

By chance I know that the information that ‘the inhabitants of Snezhnoye were able to add… etc.’ comes from a British journalist, John Sweeney (on Wikipedia we can read about what sort of journalist we have here). Sweeney spoke with locals who had been struck by the fact that the commanding officer had a ‘Moscow accent’. So ‘the inhabitants of Snezhnoye’ never ‘added’ anything, it is the newspaper which adds this to the official US view, moves fact and fiction at will in the two pages of the Dutch newspaper of record to arrive at what I consider a completely unfounded account. I won’t say it is exactly the other way around, but this helps no one.

Of course I sent the above to NRC-Handelsblad first, but the response was that it was ‘not suitable’ as an op-ed piece.

Certainly from the vantage point of the newspaper it makes no sense to raise doubt about the completely one-sided, uncritical NATO line transpiring in its reporting. The paper also applauds NATO and EU economic warfare which has the explicit goal of starving the population to make it rise up against the current government: ‘If bread is no longer affordable, Putin can forget it’ (headline in NRC-Handelsblad of 16 December).

On our part we will continue to try and get to a less prejudiced judgement under the title ‘Will MH17 be our 9/11?’ Except then, for one prejudice: that war is no solution. That was already so after 9/11.