Russian fighter jet downed by Turkey over Syria: NATO a step closer to a large-scale conflict


The forces dissatisfied over the recent rapprochement between, notably, France and Russia concerning the fight against ISIS, today have taken several important steps to derail this incipient cooperation.

The bombing by Russian jets of targets in Syria is of course an irritant to those states that support ISIS and other jihadists groups.
In the US too there are important forces that are very concerned. Because if this continues, the EU sanctions against Russia may not be continued, the ultra-secret TTIP treaty that must tie Europe more closely to the United States becomes less urgent for the European countries, and the Russians will get away with the incorporation of the Crimea. 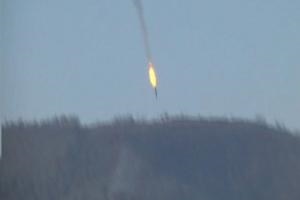 To prevent the latter, the Americans have announced to begin training the regular Ukrainian army. Until recently the US only trained the Ukrainian National Guard, meant to bring back fascist and ultra-nationalist fighting groups under the authority of Kiev. However, this new step, according to President Poroshenko meant to learn how to beat Russia, will set back a normalisation of relations with Moscow.

Now foreign secretary Lavrov responded with some laconic comment, pointing at the armies of Afghanistan and Iraq which also were trained by the US after the American invasions, without much to show for in the end.

The shooting down of the SU-24 fighter jet of course is quite a different matter and there, entirely different issues are involved. Lavrov has cancelled the trip to Antalya planned for tomorrow, 25 November, where bilateral talks with the Turks had been planned to take place.

What may have moved Erdogan, bolstered by his recent election victory (achieved by new violence against the Kurds and the political party linked to them, after the initial defeat), to order his military to attack the Russians?

When Moscow rushed to the aid of Assad’s regime at a point where it seemed as if the advance to Damascus of ISIS, al-Nusra, al-Sham and other jihadist opposition groups would no longer be stopped, the Turkish president already lashed out furiously at the Russians. A big mistake, history would condemn them, and so on and so forth.

However, Putin in turn declared a few days ago that ISIS is being supported by a large number of countries, among them several members of the G-20. Of course Ankara as well as Saudi Arabia could take that as addressed to them.

Earlier the Financial Times already disclosed that ISIS sells oil to Turkey and to the Iraqi Kurds, who have good economic relations with Turkey, unlike the Syrian Kurds who are closer to the PKK (and against whom Erdogan, as noted, intensified the struggle in recent months).

Now the Turkish president has declared that the Russian jet was shot down not only because it violated the Turkish border but because it violated the NATO border. Of course this is being denied by the Russians, and the plane and its pilots at any rate came down in Syria—in an area controlled by Turkmen insurgents. On the first video images Turkmen fighters are standing round the body of a dead pilot.

That the Turks with their attack would have wanted to support the related Turkmens is certainly a factor that should not be discounted.

The fact that NATO secretary general Stoltenberg has immediately addressed the Russians with threatening language is not so much surprising, that is what he is being paid for. But now that ISIS is really being attacked and the insight is seeping also into the mainstream media, slowly of course, that the group would not be surviving for long without Turkey, Saudi Arabia and Qatar, Turkey has raised the stakes dramatically.

Now we will have to see whether other NATO member states will go along with this. After all, they too support the jihadists, if only by calling for regime change in Damascus, or by not addressing the three countries mentioned. In addition Seumas Milne in June last has revealed in The Guardian that the CIA and their British colleagues, MU6, operate a ‘rat line’ by which weapons dropped in Libya are being transported to the Syrian insurgency.

At any rate a most explosive situation has been created.