Among the Russians (through the Cold War looking glass, that is)

I´ve just received the invitation to attend the first meeting of the group that has received three hundred thousand euros to keep the anti-Putin campaign going in the Netherlands. After the painful defeat in the Ukraine referendum it is an urgent matter not to allow the mood for war to falter. Governing is a matter of foresight! The aim is to assure that the demonisation of a leader who does not listen to instructions from the West continues unabated. 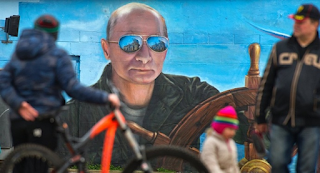 The illustration in the invitation, as above, conveys the spirit. And the introduction does not mince its words either. ´There is no way of getting round Russia in the news´. And why?

´Two years ago this was ¨only¨ a matter of supporting the regime of the Ukrainian ex-president, Yanukovych´.

That kicks it off, because well, ´regime´--Yanukovych was corrupt but nevertheless, duly elected. And ´supporting´? Putin had little in the way of admiration for his Ukrainian colleague. He only made a counteroffer against the EU Association Agreement after his initial proposal for tripartite discussions (EU, Ukraine, Eurasian Union) had been rejected by the EU.

So back to ´Among the Russians´. For, ´next there was the occupation of the Crimea and the assistance to the separatists on the eastern border of Ukraine´.

Forget the armed seizure of power that brought Yatsenyuk, selected by Victoria Nuland, the premiership. No word abut the fact that half of the Ukrainian population was robbed of its rights and rose up against the bloody repression by fascist groups led by the leader of the coup d´état, Andriy Parubiy—the reader of the Dutch quality press would not even know. That Russia honoured the referendum of the Crimea, which is mainly inhabited by Russians, and thus secured its strategic interests after three Ukrainian ex-presidents called for a termination of the lease of the Sebastopol naval base per 2017—all irrelevant!

On with ´Among the Russians´. ´The downed flight MH17 would also be traceable to Russia, via the Ukrainian rebels´. Oh sure, if you only read the Dutch quality press. Or is the ´would´ perhaps a sign that they realise it may also have been a different matter?

´Russian planes are bombing Syrian fighters in order to support Assad´s regime.´ Note this: the ´Syrian fighters', that is, those who committed the bomb attacks in Brussels, who cut the throats of prisoners in front of the camera, and who want to make Syria the next Iraq and Libya. Yes, Assad, that can be called a regime, but the Russian intervention has brought the warring parties to the negotiation table in Geneva. Or not? Let´s ask at the meeting of ´Among the Russians´!

Finally, the splendid conclusion, ´All through homosexuals are being threatened and maltreated, opposition parties repressed and no end in sight as far as the rule and popularity of Putin is concerned. Brilliant, all in one sentende. Poetin in bold. Just in case you did not get who is behind the threats!

I would have put it aside were it not for the fact that this war propaganda is paid for by three hundred thousand euros of public money. Whilst the government is ´considering´ what to do with the outcome of the referendum, here we´re getting back to business. Hasn´t it become evident on 6 April that this steady flow of lies and the completely one-sided information coming from lieutenant-colonel (ret.) De Haas (´professor at the Nazarbayev University of Kazakhstan´, that renowned centre of scholarship), a collaborator of the Cold War fossil, Radio Free Europe, and quality journalist Hubert Smeets—that such ´information´ has the opposite effect?

I am not enamoured by Putin at all—I had invested my hope in Gorbachev. But Gorbachev was not popular in the USSR, whereas Putin is popular in Russia. Too bad for ´Among the Russians´ and I am afraid the three hundred grand of our government will not change that.

As the old war horse, Henry Kissinger, once warned, we should be careful not to make Russia lose the Second World War too now that we treated it the way we do after its defeat in the Cold War. Because the systematic humiliation of a country, the ridiculing its chosen leaders, will not produce a leader that we want. Really, there will not be another Mark Rutte in the Kremlin, or any other of our provincial politicians!

If Putin is brought down (and the West is workin on that—in Ukraine, in Syria, through sanctions, and by supporting opposition forces in Russia itself), then somebody will emerge who may be many times more nasty than Putin.

´How can we explain the apparently brutal and rude Russian geopolitical posture?´ asks Among the Russians. They should take ours as an example, in Yugoslavia, Afghanistan, Iraq, Libya…! The Russians support Putin because he resists that policy—actually, in a very moderate way. And if he fails, they will elect somebody who does it better. And then we will think back and regret Putin is gone.