Yesterday morning a delegation of Oorlog Is Geen Oplossing and the Centre for Geopolitics paid a visit to the building of the Second Chamber in The Hague to explain our position concerning the JIT report about which parliament would hold a debate later that day. Harry van Bommel of the Socialist Party had been so kind to invite us, and besides parliament officials, the MP's Ten Broeke (VVD, liberal), Servaes (PvdA, labour), Voordewind (ChristenUnie, Christian orthodox) en Omtzigt (CDA, Christian democratic) attended. 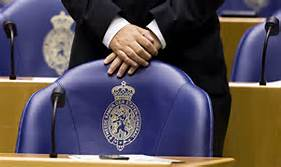 I was privileged to speak on account of the almost finished book ((in manuscript, still a month or so to go) The Downing of MH17—A Political Economy of the New Cold War. We had announced our visit with a four page memorandum (Will MH17 be… etc., # 18) with a press release.
Honesty dictates that I initially lost my courage in the moment of taking the floor because I realised a dialogue of the deaf was about to start. Thehead-shaking by the representatives of the parties of the governing coalition (VVD-PvdA), however courteous they were otherwise, made that abundantly clear after the first sentences.

In the earlier Cold War there were also diametrically opposed political views, say about the Cuba crisis, the intervention in Czechosovakia, or Vietnam, but on the facts per se not much in the of a difference of opinion was in evidence. Now we are speaking, as John Kerry said of his Russian counterpart, Sergey Lavrov, as if living in parallel universes.

For me the history of MH17 beginst with the decision to expand NATO into the former Soviet bloc and the USSR itself. The seizure of power in Ukraine, the civil that erupted afterwards, the involvement of the West and Russia with the respective Ukrainian parties, on 17 July led to the downing of MH17, and after that it continued as a propaganda war etc. So it is not primarily a matter of how many paticles exploded, whence the missile came from, etc., even though the reports of the Dutch Safety Board and the JIT make it necessary to address those issus as well.

Yet the new Cold War is first of all a vast political economic conflict between neoliberalism capitalism, meanwhile under the influence of speculative money capital, and state-oligarchic or 'crony capitalism'. Russia with its Eurasian Union. With China in the BRICS and in the Shanghai Cooperation Organisation, face North Atlantic finance capital and the NATO/EU combination in this conflict.

All further antagonisms, ideological, military, but also the different concepts of politics (both moving in the direction of more authoritarian rule, but in different ways), flow from that basic conflict.

In brief, politics has not been absent from the bloodbath in Ukraine. Still there has been a successful attempt to de-politicise the downing to 1) a technical issue (how, where, with what—the task of the DSB), and 2) a criminal investigation (who is guilty, was it by intent or neglect—this was for the JIT to find out). It all was based on the assumption one can take the MH17 drama out of its context.

All the members of parliament agreed with our call for 'restraint', but most of them meant something completely different, that is, restraint because the JIT report has supplied the materials for a court case. So let us give Rusia the time the supply the missing evidence and also, in case this is necessary, to extradite the suspects, and so on. We however consider restraint as limiting the new Cold War, and not raise tension any further.

The parties in government but also most opposition parties argue that the evidence is not yet public because it is part of an ongoing judicial procedure and can only be made public in the court room. The example would be the American satellite images that the JIT claims to possess. We on the other hand are saying that the fact these satellite data are not being made public, makes clear that they are not there, because the campaign against 'Putin' has been going on without a change in stride. And if the matter is 'before a judge', shouldn't we then also exercise restraint until the judge has given a verdict before accusing Putin? Yet he has been under fire now for two-and-a-half years, with or without proof.

And also, what about playing the tapes on which the one hundred candidate suspects can be heard—shouldn't those have remained under wraps too until the court case?

In brief, the MH17 investigation, which in our opinion has been completely compromised by the veto grante to Kiev, one of the potential suspects, pretends to be technical and a criminal investigation, each with their on, non-political requirements, whereas in reality the political-economic Cold War has not abated for one moment. So we 'play' a technical investigation and a criminal prosecution, but there is a war going on simultaneously, economic warfare (sanctions), a propaganda war, and actual violence in Ukraine itself. Thus an attempt is made to topple political power in Moscow. From the Dutch point of view, MH17 is overriding issue, but for Russians (and Ukrainians) MH17 is one part of a war situation that has made further tens of thousands of casualties, produced more than a million of refugees, (even more) impoverishment, and new threats of war. In such a situation one is perhaps not so eager to give away the potential and location of oneś radar installations and satellite observation. That is my only explanation for the inconsistent and hardly cooperative attitude of Russia.

Kees van der Pijl (with thanks to Karel van Broekhoven).