After the presentation of the JIT report two weeks ago most of us will involuntarily assume that its conclusions are the result of more than two years of hard work. Even if the outcome has come about essentially under the direction of the notorious Ukrainian intelligence service, SBU, still we should recognize the enormous amount of tough investigative work that went into it. Just think of listening to all these tapes, around 3,500 from a batch of 150,000, in cramped accommodation in Kiev, in languages you don’t understand!

In fact the story that has now been presented has been almost unaltered since 17 and 18 July 2014. To understand why the JIT Report does not really depart from the Dutch Safety Board’s of October 2015, and why through the entire two-year period from the disaster to last week, the media celebrating the ‘irrefutable’ evidence finally available, have in fact never said anything else (a Buk driven from Russia and back again after downing flight MH17) we only have to go back to the fatal date of 17 July 2014.

Right after the downing the spokesman of the Kiev interior ministry and member of the National Security and Defence Council (the hotbed of the anti-Russian war party), Anton Gerashchenko, on his Facebook page posted the widely disseminated picture of a white smoke trail against a clear blue sky. 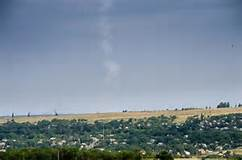 The picture was accompanied by the text,

Putin! You and your cronies will not escape from the International Tribunal. This is a photo of the inversion of the footprint left behind after the launch of the Buk missile. Made after a few minutes in the third district of Torez from the West to the East. Thousands of people saw the launch and the flight of the rocket, which you lovingly gave your sponsored terrorists!

However, according to all sources it was overcast on the 17th, with alternating cumulus cloud and patches of sky; and in the direction Gerashchenko indicates, and where the supposed launch had taken place, there was even integral cloud cover. Also, of the ‘thousands of people who saw the launch’, none have come forward (it is a different matter to produce an animation and then ask people whether they saw this a few years ago, because some will say yes, also because they know what is at stake).

When a few years ago a comet unexpectedly splashed down from the stratosphere in a remote, almost uninhabited area of Siberia, several people took pictures with their mobile phones which were broadcast by Russia Today. But in the densely populated area where the supposed Buk launch took place, nobody apparently thought of recording it. Even so this is the heaviest anti-aircraft missile in the post-Soviet arsenal, which announces its deadly mission with a bang that resonates for miles around. Luckily that Gerashchenko had his camera ready! Because his picture keeps being dutifully reprinted in media all over the West to this day.

Still on the 17th, Gerashchenko also posted a picture of a Buk launcher, with the text ‘here is further evidence for the International Tribunal: a Buk installation was passing through the city of Torez this morning!’ The next day, 18 July, he was able to reveal that the Buk launcher was back in Russia ‘to be destroyed’.

Why that would make sense at all he did not explain, but his boss, Interior Minister Arsen Avakov, on his own Facebook page, also on the 18th, reported ‘a track-mounted missile system, moving in the direction through Krasnodon, toward the border with the Russian Federation’ at 04:50 a.m. on July 18. ‘Presumably this is the missile system “BUK” that yesterday fired on the civilian aircraft Amsterdam-Kuala Lumpur.’

The Buk launcher supposedly ‘fleeing back to Russia’ in that case had taken 12 hours to cover the small distance ‘rushing home’, but the deputy editor of the English-language Kyiv Post nevertheless called this ‘irrefutable evidence’. Not to be outdone, the US embassy in Kiev the next day claimed that Flight MH17 was ‘downed by a[n] SA-11 surface-to-air missile from separatist-controlled territory in eastern Ukraine’. And 'irrefutable evidence' it has remained, because that is how the New York Times and our Dutch quality newspapers still called it on 29 September last (the mass circulation Algemeen Dagblad instead exhorted to 'go after the perpetrators now!').

Further analysis of the pictures of Buk missile launchers driving through towns, or being moved on a flatbed transport vehicle, etc., revealed numerous problems notably with the seasons, such as a blossoming elderberry bush on the roadside (which normally blossoms in May and from June has black berries), and even several pictures showing bare trees (see the photo section in Niemöller's MH17 book). Why a Russian Buk unit would have come all the way from Rostow military district using a stolen civilian transporter to fire an uncertain shot from a single launcher, was never explained.

All the questions that have been raised regarding the JIT Report have been asked from 17 July/ Isn't the one of the more frightening aspects here that all these Western politicians and media, who have been feeding each other the ravings of Gerashchenko and Avakov for more than two years, one day will have to confront the fact that it may not even have been a Buk ? To be continued.