NATO as a malignant growth (3). After victory

When the Soviet Union collapsed in 1991, the global military and political balance was completely overturned. Reflecting the new prominence of reunified Germany, the EU, established in the same year, redirected European enlargement from the south (Greece, Spain and Portugal), towards the east. NATO would not stay behind, and in spite of the solemn promises to Gorbachev, by 2009 it had advanced to Russia’s borders and incorporated several former Soviet Republics, whilst others were courted to join, too. 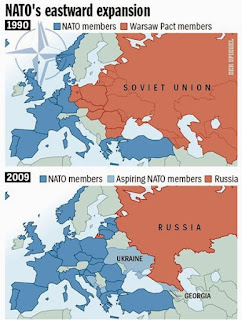 Right in 1992, the Pentagon published a planning document signed by Deputy Defence Secretary Paul Wolfowitz. It proclaimed the United States the sole superpower and vowed never to allow any other state to even come close to US military pre-eminence. The EU, too, was warned not to take initiatives outside the Atlantic alliance.

In line with the Wolfowitz Doctrine, NATO was revamped into an offensive military structure with a global mission. In late 1991, NATO member states already signed up to out-of-area operations. When Germany proceeded to unilaterally recognise the secession of catholic Slovenia and Croatia from Yugoslavia, the United States responded by encouraging Islamic Bosnian and later, Kosovo Albanian statehood. The need to curry favour in the Muslim world and Central Asian energy resources left unprotected after the dissolution of the USSR, both were at play here.

During the Clinton presidency, pressure for actual NATO enlargement was growing. The ‘US Committee to Expand NATO’ was chaired by a director of Lockheed Martin. In January 1994, the inclusion of Poland, Hungary and the Czech Republic was decided; in Yugoslavia, NATO undertook its first out-of-area operation against the Bosnian Serbs later in the year. Richard Holbrooke, responsible for Yugoslavia in the State Department, wrote that ‘the West must expand to central Europe as fast as possible …, and the United States is ready to lead the way’. Bombing Bosnian Serbs in 1994 and actual Serbia to cover the Kosovo secession, showed that these were not empty words.

Even with the pliant Yeltsin, however, it was necessary to quell Russian concerns about the relentless advance of the Alliance to its borders. The NATO-Russia Founding Act of 1997 promised that no NATO nuclear weapons and permanent troop deployments would take place in any new member states. Yet in the same year, Georgia, Ukraine, Azerbaijan, and Moldova joined a low-key security organisation of former Soviet republics under the auspices of the US, the UK and Turkey (after the initials, GUAM; Uzbekistan too later added a second ‘U’). They attended NATO’s 50th anniversary conference in Washington in April 1999, with the bombing of Serbia in full swing.

France, having rejoined NATO’s military organisation, wanted more restraint in the Kosovo crisis, but found it was being completely ignored. In hindsight, the dissolution of Yugoslavia served as a dress rehearsal for the pro-Western coup and the subsequent civil war in Ukraine, with Serbia in the role of Russia and Kosovo’s KLA former Maoists the model for the Ukrainian ultra-nationalists and fascists who seized power in February 2014.

The War on Terror in response to the attacks on the Twin Towers on 9/11, propelled NATO into a regime change operation in Afghanistan. It revealed that out-of-area operations were part of an offensive posture that has its roots in Western, notably Anglo-American imperial ambitions. The maintenance of a vast military-industrial complex and the quest to control energy sources and pipeline systems are its main drivers. Certainly, when Britain and the United States invaded Iraq in 2003, Atlantic unity was briefly fractured; but within a year, France, Germany and Belgium were brought back into the NATO fold.

The Baltic states would become NATO and EU members in 2004. At the Bucharest NATO summit in April 2008, Ukraine and Georgia were given signals they were candidates for membership, but France and Germany still resisted. Georgia had been pulled over into the Western camp by the ‘Rose Revolution’ in 2003 that brought Michail Saakashvili to power. Encouraged by the Bush administration and Israel, he decided in August 2008 to try and recapture the breakaway province of South Ossetia by force—only to be dealt a humiliating defeat by a Russian counter-attack from North Ossetia. As if Moscow had not warned, from 2005 on, that it would no longer tolerate NATO adventures on its borders.

Ukraine, too, in 2004 was subject to a ‘colour revolution’, the Orange one, but a true pro-Western and ultra-nationalist seizure of power had to wait till 2014. This plunged the country in a civil war with the Russian-oriented south and east and provoked the secession of Crimea and its reincorporation into the Russian Federation, which it had wanted to join right from the dissolution of the USSR.

All this was grist on the mill of NATO. The fact that Russia now stood up against Western forward pressure was construed as ‘aggression’, giving the alliance a new lease on life, which after the Afghan debacle was far from certain. The calamitous consequences of the NATO regime change in Libya in 2011, which kicked in the door that hitherto had kept Africans from crossing the Mediterranean to Europe, were also forgotten.

The new enemy, ‘Putin’, became the focus of NATO propaganda, energetically disseminated by the mainstream media. Today, anti-missile batteries on Russia’s borders, a steady inflow of US and NATO military hardware into the Baltic states and Poland, and provocative exercises slowly moving in on the Russian exclave of Kaliningrad (wedged in between Poland and Lithuania) have triggered a new Cold War involving unprecedented risks.

NATO has brought the world to the brink of nuclear annihilation. Its dissolution is the most urgent task facing humanity today.