Will MH17 be our 9/11? (23) The propaganda war around the Severshenno Sekretno documents

The documents in the Russian magazine Severshenno Sekretno that I commented on earlier now have turned out to contain very obvious mistakes—possibly too obvious. A Bulgarian blogger, Christo Grozev, has revealed these mistakes and he accuses other blogspots including ours of serving as 'the Kremlin's echo chamber' in spreading fake news. However, his rebuke can also be read in a completely different way, as a further move in the propaganda war. Whether Christo is a conscious party to this or himself has walked into a trap, I cannot judge. But to ascribe the Severshenno Sekretno falsehoods to 'the Kremlin' is clearly a step too far and may paradoxically even mean that certain unofficial investigations are getting too close to the truth. 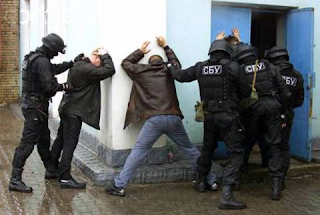 Of course it is very helpful that someone who knows a lot about the internal affairs of the Ukrainian intelligence service SBU (pictured in action) and who reads Ukrainian, takes a closer look at what the documents actually say, their wording, and how they are presented. But is it really a refutation?

My own interest after reading the English summaries of the documents' contents was aroused by the similarity with the MH17 chapter in Josef Resch's memoirs. Resch describes how he was approached by various claimants for the $ 30 and 17 million bounties awarded for whistle-blowers who could reveal the identity of the perpetrators of the downing, or of those suppressing evidence, respectively.

Resch cannot reveal the identity of the informant who eventually made a successful claim for the latter sum, but from the tone and thrust of his chapter one can only conclude that the claimant earned the 17 million or part of it by revealing that Kiev suppressed evidence. Resch is also scathing about NATO commander Breedlove and about British informants linked to the intelligence service MI6, who came up with the sort of evidence that later would form the basis for the JIT investigation (such as phone taps), an investigation effectively hijacked by the SBU.

In addition he extensively cites the evidence of a Russian whose story was rejected by the client, but which Resch takes very serious. I do the same because a lot of circumstantial evidence points to the airfield of Chuguiev having played a suspicious role—planned radar maintenance during a maximum alert of all air defences, to name but one. Both the Severshenno Sekretno documents and the Russian informant of Resch say that it was from Chuguiev that a jet attack was launched.

One does not have to be a Kremlin stooge to be at least interested in pursuing the Severshenno Secretno information that adds further detail on precisely this issue.

In my previous blog I already raised the question about the A-1401 air force unit, which is a type of plane and not a unit listed in the Ukrainian defence line-up. But I cannot read Ukrainian, and Christo comes up, not with typos, but with gross, indeed grotesque errors.

These include a reference to a branch of SBU which has long ago been shut down, the use of a red stamp which is used in Russia but not in Ukraine, and speaking of the rebellious Donetsk republic as a 'neighbouring state'.

So 'the Kremlin' would be ignorant of all this, make such an error, and select a sensationalist magazine to make the documents public? And then with a sob story about an SBU whistle-blower out to make money from the documents, but who after the magazine tells him they can't pay, hands them over nevertheless for the sake of the truth?

I have no knowledge of the inner workings of the SBU, I only know from Misha Glenny's book McMafia and other sources that it is a criminal organisation, from the UN committee on torture that it is suspected of maltreating people it holds in custody, from Dutch media that it is active in art theft and that its long-time head, Valentin Nalyvaichenko, as a diplomat already smuggled art treasures himself. After that he peddled stories about the downing of MH17 which revealed nothing much except a serious underestimation of his audience's intelligence.

If the forgeries, which appear to have been really worked on to make them look authentic, would contain some doubtful statements, or one unintentional mistake, it would be possible to raise doubts about their authenticity. In other words, they might be authentically unauthentic. If on the other hand, so much work by competent forgers has gone into them, and yet they make completely absurd statements such as on the neighbouring state of Donetsk, there may be more to it.

Therefore I think we must consider the following possibility. Admittedly, an entirely speculative one, also because I don't know who shot down the Malaysian Airlines Boeing or how. But if too many facts and claims are beginning to converge on a narrative that MH17 was downed by a jet from Chuguiev airbase near Kharkov, one way of diverting unwanted attention is to discredit that story by coming up with obviously false/fake version of it. Case closed?