Agreement in Minsk, but not everybody is on board, not even the EU

Amidst widespread relief about the agreement concluded in Minsk to put an end to the bloody civil war in Ukraine, the first dissenting voices are being heard. Antiwar.com reports that Dmytry Yarosh, the leader of the neo-nazi Right Sector, has declared that with ‘terrorists’ no agreement is possible and as far as his formation is concerned, the fight will continue. 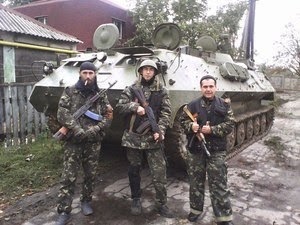 Meanwhile the federalists in the east (pictured) in turn proceed on the assumption that Ukrainian forces they have encircled near Debaltseve, under the provisions of the agreement are expected to surrender. Hence the fact that in this corridor, which cuts off the communication line between Lugansk and Donetsk, both sides keep shelling each other.

The overwhelming majority of the population in west and east Ukraine on the other hand want an end to this absurd war, for which, as I have argued several times already, there has never existed a domestic majority. And even if one of the consequences of a civil war, once unleashed, consists of increased mutual hatred, the leaders of the coup regime in Kiev still cannot count on support for continuing the fight, not even in their ‘own’, western provinces.

A few days ago the Ukrainian journalist, Andrey Zakharchuk, was arrested for ‘inaccurate reporting’. He is the second journalist after Ruslan Kotsaba, arrested on 8 February for having sent an appeal to president Poroshenko to discontinue the draft. Kotsaba on that occasion declared that he preferred being jailed for five years rather than take up arms against his ‘fellow countrymen in the east’. The iron fist of the regime against these voices is necessary because the draft is already being ignored on a large scale, and even the decree that men of military age (25 to 60) are no longer allowed to leave the country, will not change this. Domestically there is no appetite for ruining the country further—for that we have to look outside its borders.

And that first of all concerns the European Union. It at this point has taken over the lead from NATO now that Obama is having trouble convincing Congress to give him a free hand for a war of unlimited duration against the Islamic State. Believe it or not, the EU on the very day that the two most important leaders of the bloc concluded the agreement in Minsk with Poroshenko and Putin, has imposed new sanctions against Russia.

In other words, the West wants to exacerbate the antagonism and has not renounced the suicidal project to incorporate Ukraine into Europe—as if the more than thousand years of shared history between Kiev and Moscow have never existed.

The sanctions have caused great damage and will still have further, colossal economic consequences, among other things by the cancelling of the South Stream gas pipeline under the Black Sea, which will be rerouted to Turkey. But if the intention was to bring about regime change in Moscow, they have achieved the opposite—Putin retains, with an 85% approval rate (ten percent more than two months ago), the confidence of the overwhelming majority of the population.

In Ukraine on the other hand, it has become difficult to imagine how any sort of national unity-in-diversity can still be recovered—because again, even the people in the east who speak Russian as their first language, consider themselves Ukrainians, and unlike the Crimea, they do not seek secession to Russia. Besides the vast material destruction, the thousands of dead and more than a million refugees, the total alienation between the regime in Kiev and the population in the east is also a result of the disastrous Western policy. The country in other words has not been incorporated, but destroyed.