Charlie Hebdo one year on

This article is a translation of "Charlie Hebdo een jaar verder"

Last week extensive commemorations took place in Paris to remember the attacks on the Charlie Hebdo satirical magazine a year ago, a drama compounded by a deadly hostage taking in a Jewish supermarket, Hyper-Kacher.
When these events happened, followed by the largest demonstrations in French history under the slogan Je suis Charlie, I expressed my doubts on whether what we were told about what happened, was really the whole story.
And if I would have been wrong, I would gladly accept the mistake. 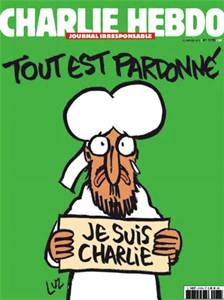 Unfortunately what has come to the surface only confirms the suspicion.

‘Unfortunately’, but there is no alternative but to investigate matters like these because our political system is changing fast in an authoritarian direction—to safeguard, ironically, our ‘freedom’. So once again.

Here I can only add some snippets that have come into the public domain since.

First, about Charlie Hebdo itself. The magazine in its current form dates from 1991. Especially after 2000, under its new editor, Philippe Val, Charlie moved closer to the circle of future president Sarkozy. Whilst continuing to satirise Islam (and Christianity) in the most offensive ways, it began to spare Judaism and Israel. Jeannette Bougrab, who under Sarkozy was a junior minister, later claimed to have been the girlfriend of the slain cartoonist, Charb, and is rumoured to have assisted the magazine financially; Val was appointed by Sarkozy to head the state-owned France-Inter broadcaster. In 2008 on the other hand, the veteran cartoonist, Siné, was fired for lampooning the president’s son, Jean Sarkozy’s decision to convert to orthodox Judaism. Siné’s caption under the cartoon was ‘This lad will go far in France’, a reference to the advantages of Jewish connections in French society, but the Charlie director considered this anti-Semitic. It certainly underscored the pro-Israeli position when one month before the attack the bankrupt magazine was bought by Eduard de Rothschild of the famous banking dynasty. However, that Charlie’s print run soared from 60,000 to seven million after the attacks, an all-time record for the French press, even a Rothschild would not know in advance.

What we are looking at instead are 1) profound shifts in the orientation of the French state towards an authoritarian posture to deal with the growing crisis, a shift for which 2) the War on Terror provides the international framework.

Here we must note a remarkable similarity between a 2012 terror attack and the Charlie Hebdo drama a year ago. In March of that year, three men of North African origin, members of a parachute regiment, were shot dead in Toulouse and Montauban in the south of France. This has been traced to serious racial tensions in the regiment and the possible perpetrator may have been one of a neo-Nazi node in the unit. However, a second grave incident followed straight on the first, also in Toulouse: a deadly attack on an orthodox Jewish school. Sarkozy, engaged in a difficult campaign for re-election, a month later introduced far-reaching legislation in the spirit of the US Patriot Act; but his time was running out, parliament rejected the law, and Hollande won the election.

The real surprise however was that a single culprit for the Toulouse/Montauban shootings had been produced, a known Islamist, Mohamed Merah. He was shot dead by police in a circus-like siege in late March.
Why Merah would shoot three parachutists could therefore not be answeres. The second, unrelated anti-Semitic incident however implanted the idea of an Islamist terror wave against Jews in the public mind.

Now back to Charlie Hebdo. Here too, a supposed revenge act against ‘free speech’ occurred simultaneously with an anti-Semitic terror act, by Amedy Coulibaly in the Hyper-Kacher. Again the entire affair thus assumed the format of an Islamist terror attack, with Jews prominent among the victims. Again all perpetrators were executed and in spite of oddities (both Kouachi brothers leaving their identification in the getaway car) and inconsistencies (a policeman, Helric Frédou, who refused an order to stop investigating the controversial connection between Charb and Jeannette Bougrab, supposedly committed suicide whilst working on his report), so there was no one to be interrogated for more detail.

There is more. Thus in the case of the Hyper-Kacher, its owner, Michel Emsalem, sold the shop the day before the incident and moved to New York after the events.

The victims were buried in Israel, like those of the Jewish school attack in Toulouse two years before. On both occasions Netanyahu called on French Jews to emigrate to Israel.

Netanyahu is also the architect of the idea of a War on Terror (as explained in his volume, Terrorism. How the West Can Win, papers from a conference in Washington in 1984). In an interview for French TV on 7 August 2014 he warned against recognition of Palestine: ‘This is not Israel’s battle. It is your battle, it is France’s battle. If they succeed here, if Israel is criticized instead of the terrorists, if we do not stand in solidarity, this plague of terrorism will come to your country.’

Two weeks before the Charlie murders, the parliament in Paris nevertheless recognised Palestine’s right to exist as a separate state. Was Netanyahu’ statement a warning—or a threat, carried out on 7 January?

At any rate, the state of emergency and anti-terror legislation this time sailed through the French parliament without serious dissent, and it is difficult to see it being revoked.