Amsterdam twinning with Tel Aviv—Let’s go for it!

At a time when more and more people are beginning to realise that Israeli occupation policy has been tolerated for far too long, Amsterdam’s Lord Mayor and the college of aldermen have made it known that the city will establish a twinning agreement with Tel Aviv (and as consolation prize, also with Ramallah, in what is left of the ‘Palestinian territories’ in the occupied West Bank of the river Jordan). In two years’ time, the occupation will pass the milestone of half a century—and then we are only talking about that dating from the Six Days’ War of 1967, not the violent expulsion in 1948 to establish the state of Israel in the original Palestine. In preparation for the festivities on that occasion, which no doubt will produce in abundance images such as the one below, comes the gesture of the city of Amsterdam. Congratulations! 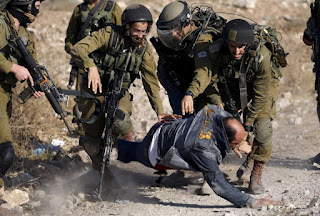 Hundreds of resolutions at the UN, in the Security Council, the General Assembly as well as the separate commissions like the one on Human Rights, have not resulted in a change of the status-quo. There is always one faithful ally which, although with almost no one else left, continues to support the Jewish state with arms and vetoes—the United States. But from time to time other old and new friends will join in, and this time that includes the Dutch capital. On the very day it became known that there will be no further prosecution of the Israeli soldiers who killed four children on the Gaza beach, the city that carries the proud ‘Heroic Determined Merciful’ on its coat of arms, comes with this misplaced gesture. Ramallah incidentally will not be embraced with the same fervour because in contrast to Tel Aviv it is not home to a lively gay scene, something that these days seems to be the ultimate criterion to make political judgements.

That the conservative liberals of the VVD and the neo-liberals of D’66 would concur in this gesture need not surprise, but one might have expected something different from the Socialist Party SP, the third in the coalition. As in the field of social policy however, principles in this domain are easily sacrificed to the aspiration to govern.

The choice of words accompanying the party’s consent reveals a lot about how such dilly-dallying proceeds. The chairperson of the SP fraction in the municipal council wants the Lord Mayor to confirm that ‘Amsterdam will not do business with companies involved in the settlements’, but the firmness of this demand (and what a demand it is) transpires in the further comment that he ‘suspects that his fraction in the end will agree to the proposal, albeit “hesitantly”.’

A year ago his predecessor, the current alderman, Laurens Ivens, spoke out against twinning with a city in ‘a country that structurally violates international agreements’.

But even apart from the fact that here we are not talking about ‘violation of agreements’ but about violating international law, war crimes and crimes against humanity, it abundantly demonstrates that even core principles will ultimately disappear in the soft cushions of ‘responsibility’.