The limit to NATO expansion has been reached

This morning we heard our liberal minister of defence, Hennis, declare on the radio that NATO is a security guarantee with ‘world-wide cover’. My travel insurance only covers Europe, but that of Ms. Hennis obviously applies to the entire planet.
NATO was founded in 1949 in response to the crisis in Czechoslovakia, where a coalition government had been brought down on the issue of whether the country should accept Marshall Aid or not. That history is bound up most closely with the current crisis in Ukraine. 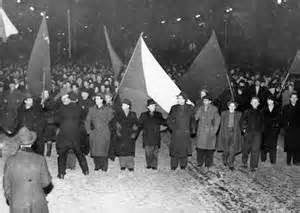 The Marshall Plan was announced in June 1947 because Washington feared that governments in Europe would persist in their strategy of national reconstruction, shutting out American exports. Even more sensitive politically, in countries like France, communists had been included in the government to make this national unity possible.

The Marshall Plan provided dollars earmarked for specific purposes, to be decided by the generous donors. In addition however, every recipient country also had to supply an equivalent amount to the dollar aid in its own currency, the so-called counterpart funds. The spending of that money too had to be approved by the Marshall authorities. That gave the Americans effective control over the direction of the economy—something reinforced by the free trade provisions of the Plan. But these did not apply to non-participating countries; with those countries no trade was to be conducted henceforth.

Before the war Czechoslovakia had a trade pattern in which business was conducted both with Western Europe and with the eastern neighbours, which as a result of the collapse of the Third Reich had landed in the Soviet sphere of influence. As a result disagreement arose within the government in Prague whether or not to accept the Marshall Plan and its strict conditions, which compelled it to make a choice for going with or against the West. In the ensuing political crisis the communists seized power by bringing their following into the streets. These incidentally were the internationalist communists around party leader Rudolf Slansky, many of whom had fought in the Spanish Civil War. Only in the early 1950s the party was ‘Stalinized’ by purges, including show trials and death penalties.

So the West pushes matters to the limit; a hardening in the East follows as a result. Only in the 1960s attempts were made under Dubcek to resurrect the internationalist, democratic tradition, a process interrupted and reversed by the 1968 Warsaw Pact intervention.

Back in the spring of 1948 secret negotiations between Britain, the US and Canada were launched on how to respond to the Czech crisis. Exactly a year later the NATO treaty was signed. Initially the alliance was mainly directed against communism in countries like France, Belgium and Italy, although the communists, wherever they had been members of the government (or as in the Netherlands, in municipal councils), had already been removed from them right after ‘Prague’.

The underground ‘Gladio’ networks date from that period. Only in 1955, when West Germany, after years of haggling, became a NATO member and the Soviet bloc in protest established the Warsaw Pact, the military deadlock ensued which eventually was broken only by the collapse of the Soviet Union and the incorporation of the GDR into the Federal Republic.

Gorbachev wanted to keep reunified Germany out of NATO. But the Bush (Sr.) government did not want to hear about it. The Soviet leader, they claimed, did not have to worry that NATO would exploit the collapse of the Eastern bloc though: the alliance (for which there was strictly speaking no basis any more, since the ‘enemy’ had given up the fight) would not pursue further expansion—‘not an inch’, as foreign secretary James Baker (pictured left next to Bush) put it. With that reassurance Gorbachev agreed to sign the Four-Powers agreement that formally terminated the occupation of Germany. 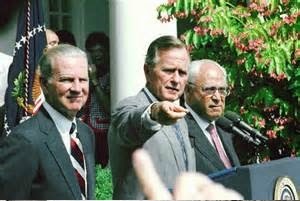 NATO did not keep its promise. Expansion began under Clinton, and the entire former Warsaw Pact (Poland, Hungary, the Czech Republic in 1999; Bulgaria, Rumania, and Slovakia next) signed up to NATO. In addition, also in 2004, the former Soviet republics of Estonia, Latvia, and Lithuania joined as well.

1999 was an important year because the NATO treaty expired and the question arose whether the alliance was still meaningful. That question was answered by the NATO intervention in the Yugoslav civil war, itself provoked by the decision of unified Germany to recognise the secession of Slovenia and Croatia and deny the right of the federal Yugoslav army to maintain the integrity of the country’s western borders. Meanwhile Slovenia (2004) and Croatia (2009, simultaneously with Albania), also have joined NATO. In addition a sort of NATO waiting room construction was set up in 1998-99 for the former Soviet republics of Georgia Azerbaijan, Ukraine, Uzbekistan and Moldova (GUUAM; Uzbekistan was the last to join and first out again).

In the Middle East, NATO has been active in Libya, which as a functioning country no longer exists; in Syria the Assad regime has consolidated itself even though it does not look as if the totally destroyed country will become a unified state again. The destabilisation of the Middle East that began with the invasion of Iraq in 2003 continues.

However, it is in Ukraine that the limits of NATO expansion have been revealed most clearly. The Maidan revolt in Kiev followed the pattern of the ‘velvet revolutions’ in which an authentic mass movement (which cannot after all be organised from the outside) gains ‘support’ from an infrastructure to remove elected but unwanted leaders, which has been developed in the United States. The ‘Orange Revolution’ in Ukraine in 2004 was only one of a series that runs from Albania to Kyrgyzstan. It also backfired a few times, notably in Belarus. Russia in turn has created its own youth organisation just in case anyone would attempt to set up a campsite with round-the-clock pop music concert in Red Square.

Earlier this year Ukraine was placed before the same dilemma by the EU association treaty, as Czechoslovakia was by the Marshall Plan. Because Ukraine cannot exist without Russia—not only because of commodity trade and gas transit and trade (on credit), but also by migrant labour and studies abroad. Because the EU treaty, in addition to free trade (which in due course would have meant the end of the antiquated industry in the east), also contained a defence paragraph, Russia felt that its naval base in the Crimea was being put in danger.

This explains why Putin has drawn a line in the sand and brought the NATO advance to a halt. Secretary Hennis must really not count on ‘the alliance’, should she decide to claim ‘guarantees’ east of that line. The Russians are paying the West back in kind, even though no Russian politicians have mingled with demonstrators to distribute sandwiches and empty promises, as have Victoria Nuland and our Frans Timmermans. But the ‘world-wide coverage’ no longer exists, and in fact never has.