The assassination of Boris Nemtsov and Ukraine

The shooting down of the politician and businessman, Boris Nemtsov, on a later night walk in Moscow has immediately led to the expected reactions in the West. Obama, Cameron and other leaders demand with high-pitched voices that there will be a thorough investigation. The unavoidable conclusion is that otherwise, the death of ‘our man’ Nemtsov will be covered up. After all, he was a ‘sworn enemy of Putin’s’ (the two are pictured below, in better times), a tireless champion of democracy, etc. So, being shot down close to the Kremlin… Any further questions? 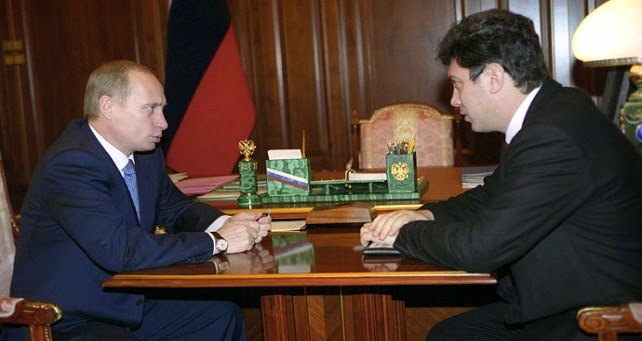 Perhaps more importantly, there is an agreement, concluded under the auspices of Merkel and Hollande and without involving the US and Britain (other than Merkel paying a visit to Obama to arrange that she has a free hand). For today, 1 March, Nemtsov had planned a demonstration against Russia’s policy in Ukraine.

There has also been the suggestion of a connection with Charlie Hebdo in Paris, but if so, that would then rather be one in the sense of Gorbachev’s comment, viz., that the assassination is an attempt to destabilise the political situation in Russia. Because now the horror and indignation evoked by this brutal act may possibly be mobilised against Putin. ‘It is an attempt to push the situation to complication, maybe to destabilize the situation in the country’, Gorbachev claims.

In this light there is a connection of some importance with the call by the inveterate warmonger, Timothy Garton Ash, early February to ‘stop Putin’ with military means. When in 1989, West Germany under Kohl wanted to rush to the aid of then-Soviet president Gorbachev, the same Garton Ash at the Bilderberg conference in La Toja in Spain raised the call to ‘stop the Federal Republic’ from doing so.

Because a former student of mine once had to clear out the archive of one participant, he gave me the papers of the Bilderberg event, including the typed version of Garton Ash’s speech, on the condition I would not reveal how I got them. As a result I was able to make a connection, in my book Global Rivalries from the Cold War to Iraq with the assassination of the banker, Alfred Herrhausen of the Deutsche Bank, later that year (1989)—officially by the Rote Armee Fraktion. As the key adviser of Kohl, Herrhausen had drawn up a ten-point plan for a high-speed rail link to Moscow and a further set of far-reaching projects for economic cooperation. That plan thus had been ‘stopped’, even though Garton Ash may never have intended such a literal interpretation of his words.

Whoever watches the movie, Leviathan, will have no difficulty imagining the corrupt, mafia-like power structures in Russia. One murder extra will make no difference there. But although there is a picture of Putin on the wall in the movie scene in the court of justice, that does not mean that everything that happens there, in a village somewhere near Murmansk, has been ordered by the president (the film was actually made with Russian state support, although there was a lot of grumbling about the result). At any rate, political murders ‘near the Kremlin’ are not necessarily the work ‘of the Kremlin’.

It is remarkable that this time, the Dutch daily, De Volkskrant, has not yet joined the anti-Putin campaign. Rather it follows the initial assessment of the investigation team established by the Russian president. Indeed nobody at this moment has more to lose than Putin, who has managed to get an agreement in Ukraine and enjoys unprecedented support among the Russian population (around 86 %). The investigation team is looking at different motives for the assassination, possible involvement of Nemtsov’s own party, etc. ‘The team moreover does not exclude that there is a link with the conflict in Ukraine or that we are looking at a settlement of personal feuds emanating from business circles’.

These latter two motives may actually have merged into each other. As once in the case of the Herrhausen murder, there is somebody who makes a statement in a political context (‘to stop … ’) and via a series of intermediaries, such an idea percolates to people who are actually capable of executing it. These then have the feeling that they have been given ‘a green light’, even if an actual hit may not have been the real intention of the initial speaker. Yet attention to the situation in Ukraine in the coming weeks and especially the role of the United States, is most certainly warranted.