This article is a translation of "Van Syrië naar Parijs. Doelwit Charlie Hebdo"

A few years ago on a holiday in France I saw a round table conversation on TV in which a female writer spoke about the psychology of Arab men. In matters of death and dying these were supposed to have different attitudes than we in Europe are used to. In passing she noted that many of the leaders of so-called Muslim terrorist organisations actually live in expensive apartments in Paris and London. The moderator asks, casually, ‘Is that really so?’, to which she almost shrugs her shoulders as if this were self-evident.
Involuntarily this came back to me yesterday when I heard about the deadly attack on the editorial offices of the satirical weekly, Charlie Hebdo. 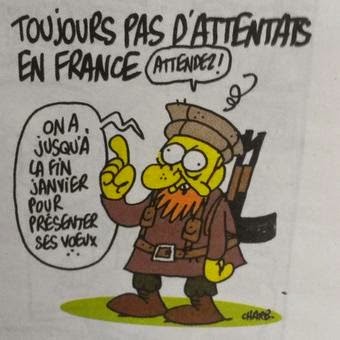 Still no attacks in France, reads one of the magazine’s last cartoons before the bloodbath. ‘Attention!’ ‘You still have to the end of January to convey your best wishes’. And from whom did these ‘wishes’ come, now that the joke turned into murderous reality?

Terrorist acts like these have a 100 percent predictable effect. Politicians express their horror and (much more importantly) announce an intensification of the fight against terror. Hence, more people are being stopped and searched, rights are cut back, and step by step we move to a state of emergency. But wasn’t this fight already in progress? What otherwise is the purpose of all the secret services, of all the wiretapping?

The readiness of the public to tolerate more repression is equally predictable. However sincere, the ‘I am Charlie’ demonstrations at the end of the day are nothing else but a referendum in favour of reinforcing the state. The fact that ‘freedom of expression’ is actually being curtailed left right and centre (just read or watch our own media)tends to be overlooked. And then we are not speaking of that other referendum, for or against Islam, presented to a fearful population by Marine Le Pen in France and Wilders in the Netherlands.

It was known that Charlie Hebdo could become the target of a brick through a window or even a bomb thrown by fanatics, hence the police guard. But as everyone can see on the internet video, the perpetrators were no overzealous fanatics but calm professionals. To kill two armed policemen and then slaughter the entire editorial team, ten people, and drive off… that is not an amateur job.

Not one organisation has claimed responsibility for this criminal attack but ‘luckily’ the suspected perpetrators both left their identity cards in the car they fled in. One cannot avoid the thought that such an unlikely mistake might be made by one of them, but by both?

One of two, Chérif Kouachi, had appeared before a magistrate already because he had travelled to Syria after the invasion of Iraq, and there received training in a salafist school. Both he and his brother Saïd were known to the police, in this case the French internal security service (DGSI) and the intelligence service of the police prefecture of Paris (DRPP).

That brings up an uncanny issue. In March 2004 a commuter train in Madrid was blown up by ‘al Qaeda’. 191 dead, a government brought down. But as the Times of London later revealed, the man suspected of having supplied the dynamite, in his address book had the private phone number of the head of the Guardia Civil bomb squad. In the important book by Nafeez Ahmed, The War on Truth. 9/11, Disinformation, and the Anatomy of Terrorism, in which this is cited, the author also provides an interesting explanation why FBI agents who in the years prior to 9/11 warned their superiors that suspect Saudi men were attending flight schools in the US, were systematically ignored. These Arab suspects, Ahmed ventures, were double agents enjoying protection high up—which is not the same as saying that on 9/11 they therefore executed FBI instructions. ‘Double’ agent means that they also got instructions from other sources, for example from Saudi Arabia.

Hence we can never exclude surprises. But what is clear from the examples is that attacks like that on Charlie Hebdo can be part of different agendas. The Front National will profit, but only parts of the state apparatus can manipulate this kind of dark structures, and the sympathy the FN enjoys in police circles would not suffice. However, supposing that the aim was to strike at the French state, the choice of target is suspect, to say the least: Charlie Hebdo was also very much hated by the right. Yet to have two policemen shot dead, is a different matter.

Finally, as the Saudi example illustrates, the shadow world in which double agents operate, is usually internationally ramified. And with ‘double’ I mean that their doings are being watched or directed from at least two sides—not necessarily in formal employment relations, with two pay slips. In that context the question arises, who outside France wants to influence politics in Paris? Washington, now that France has expressed its preference to end sanctions against Russia? Israel, now that the French parliament has recognised the Palestinian state, and profits from emigration of French people of Jewish background to Israel?

Recently it was suggested in our O≠O network that we need a more fundamental insight into the forces active in the civil war in Syria and the rise of ISIL. In light of the above I would think that there runs a trace back from ISIL to 9/11 and that the role of double agenda’s in both may well be much more important than many think.

And for those who consider this over the top, there is also a more down to earth alternative: That whoever supports violence and tolerates jihad tourism to topple Middle Eastern regimes, should not be surprised if that violence one day also strikes home.