Do we really want war? In that case, let’s continue to follow the NATO confrontation strategy

This article is a translation of "Willen we echt een oorlog? Dan de NAVO-ramkoers blijven volgen"

During the weekend of 13 and 14 April last the director of the CIA, John Brennan, made a (meanwhile confirmed) visit to Kiev. The next day the ‘anti-terrorist’ operation was launched against the occupations in the Russian-speaking east of Ukraine. This ended in a farce, because in Kramatorsk the elite troops of the 25th airborne division did not encounter armed fighters but citizens with flowers, and they either retreated or adorned their armoured cars with Russian flags, siding with the insurgents. Still these had been the troops selected by Kiev because no other unit of the regular army was trusted. 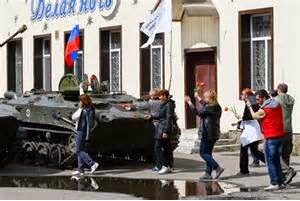 The conclusion is obvious: Inside Ukraine there is no basis for a civil war, it will have to be provoked. Of rather, Russia must be provoked to intervene by a massacre among Russian-speaking Ukrainians.

And who would want to put his signature to that?
In the meantime there have been two obvious cases in which an agreement to settle the Ukrainian crisis was immediately followed by a serious, violent incident. In both cases the EU, including the Netherlands, had to witness how the European commitment to the agreement was shoved aside as the American/NATO confrontation strategy carried the day.

The first occasion was the agreement of 17 February between president Yanokovych and the foreign secretaries of Germany, France, and Poland. A Russian representative was also present, but nobody speaking for Washington—which some have explained by referring to the leaked phone conversation in which assistant secretary Victoria Nuland made her notorious ‘f**k the EU’ comment. The agreement included an amnesty, fresh elections, and a change of the constitution. Within a day deadly shots were fired at both demonstrators and police, the agreement was forgotten about, Yanukovych fled, and the current rulers took his place.

In another leaked phone call the Estonian foreign secretary pointed out to his EU colleague, Catherine Ashton, that this massacre had been perpetrated by the insurgents, and these in the meantime have been identified as UNA-UNSO, a branch of the underground NATO network, ‘Gladio’.

The second agreement was concluded on 20 April in Geneva by the US, the EU, Russia, and the new rulers in Kiev. Again, amnesty (this time for the Russian-speaking occupiers), elections, constitutional change—and promptly, the next day a violent attack, this time by the neo-fascist Right Sector, on unarmed civilians in Slavyansk, killing five. The Russian reaction was that the West should better control the government it has installed in Kiev.

For us the most important thing is that the EU once again was sent packing. The NATO line prevails, the EU and hence, the Netherlands, are taken for granted. However, the first of May Gazprom will halt gas deliveries to Ukraine if there is no payment forthcoming. 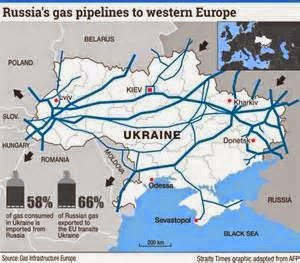 In 1991 secretary Baker declared that reunified Germany would have to part of NATO but that henceforth, there would be no further expansion—‘not an inch’.

In 1997, as a consequence of the decision of the US to expand NATO nevertheless, the NATO-Russia Founding Act was concluded. In addition to recognising all existing treaties and organisations, it was laid down in Chapter IV that no nuclear weapons and no stationing of NATO troops would take place in the new member states.

Even this agreement, still concluded with Yeltsin, will be scrapped as far as NATO is concerned. As the Indian diplomat, M.K. Bhadrakumar, writes, NATO (read: Washington) has now decided to remove this last buffer too. We are eye to eye with the Russians, no longer, as in the Cold War, at the Berlin Wall, but on the Russian border.

Is there really not a single EU country that is willing to challenge this fatal strategy of confrontation?