A world without nuclear weapons? Not as far as the US are concerned

During the visit of president Obama to the atomic memorial site in Hiroshima there was widespread curiosity as to what he would say. Would he offer an apology?

Apologies after all are a modern form of politics that comes for free. Bill Clinton for instance apologised for forcibly opening Haiti to American rice which threw local farmers out of business and drove them to Port-au-Prince as jobseekers. In the Netherlands we apologise for slavery, maybe also for the colonial ‘police actions’ in Indonesia, and so on. Nothing changes and yet you appear in a most favourable light. 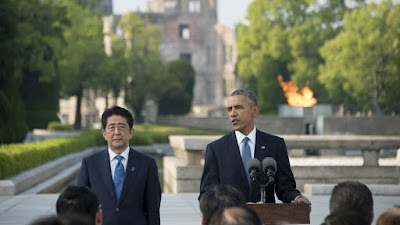 In the Dutch media Obama already got credit for a dignified but otherwise meaningless visit. The media repeated the mantra that the bombing saved millions of lives because no invasion of the Japanese mainland was necessary.


Thus we get back to square one. The ‘millions’ were maybe important for the American Army top brass, although the Japanese, who were ready to surrender, were only negotiating over whether the Emperor could stay on.


There was an at least equally important second ground for the nuclear bombardment, viz., to intimidate the Soviet Union. Secretary of States James Byrnes said literally that this weapon in the American arsenal would make the Russians a lot more manageable in Europe.


In addition it is often forgotten that a second bomb was thrown, which according to the Dutch member of the Japanese War Crimes tribunal, B.V.A. Röling, was not even mentioned in the Japanese war cabinet.


For the consortium that had produced the (plutonium) bomb did not want that only the uranium bomb thrown on Hiroshima would be the only option on the post-war wish list of the Air Force, and that sealed the fate of Nagasaki. An lo and behold, the first order for atomic bombs was for 300 plutonium bombs.


Finally historians have also debated the racially motivated hatred of Japan which especially strong in the American South. There industry in the 1930s had also suffered from Japanese textile competition, and the new US leadership after Roosevelt’s death, so Harry Truman, Byrnes, and others, were southerners.


Should hundreds of thousands of civilians die in a nuclear inferno for any one or more of these reasons?


There is of course an even more important ground why Obama has not apologised for the atomic bombardment of August 1945. And that is that such an apology would mean that on reflection, the use of nuclear weapons would be recognised as a crime.


And once you do that, can you then announce huge investments in new nuclear weapons, as the Americans are now doing?.


The Non-Proliferation Treaty not only prescribes that countries taking the path of nuclear energy, open their installation to inspection to prevent that new nuclear military powers join the club. It also determines that the existing nuclear powers take steps to dismantle their arsenals.


Yet the Obama administration in 2014 announced it would invest 1 trillion dollars in a programme to upgrade its atomic forces.


Have people then forgotten that in the Reagan years, there was a study showing that a conflict with atomic weapons would result in a ‘nuclear winter’ that would exterminate life on earth?


Here I think the concept of Mike Davis, ‘nuclear imperialism’ plays out. It refers to the ultimate ‘insurance’ offered by nuclear superiority and which makes at possible to take military risks at lower levels, in the knowledge that the other party will not dare to respond in an equally risky manner.


In 2005 the authoritative journal, Foreign Affairs, published an article that argued that the US were on the way to absolute nuclear superiority. Neither Russia nor China would be able to respond in kind following an American surprise attack.


Hence the importance, according to the authors, of missile defence. Not to eliminate an integral swarm of intercontinental missiles fired by the opponent, which would be impossible. But for the few remaining missiles still launched after a debilitating first strike, missile defence would be vital.


Last month the American missile defence installation in Rumania, which is part of a system in which the Dutch navy too is involved, has gone live.


In Moscow the conclusion is slowly becoming inescapable that the troop reinforcements on Russia’s borders are part of a policy of staged escalation which at the highest level can be decided by the US with a destructive nuclear strike.


That is why Obama allowed pictures to be taken of himself with Japanese survivors, but made no statement which might be interpreted as a rejection of nuclear weapons.


The capitalist West is stuck in the deepest crisis since the 1930s and is frantically exploring a way out. War as a result is coming closer that ever and we should mobilise against it without delay.